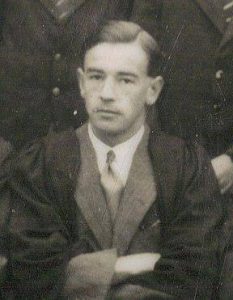 “The Beginnings: A personal note from the School’s first Headmaster HF Collins” from the Spring 1967 edition of the Martlet

The unexpected and tragic death of Alfred Scales must come as a shock to all Cicestrians, for no man has rendered over the years more devoted service to the community in Kingsham Road. I well recall the circumstances of his appointment in 1928. We met in my Modern Sixth Room at Manchester Grammar School where, in discussing the History post, he assured me that apart from his Oxford training he was without experience, “but,” he added-I hear his words now-“I think I have something to give to a new school.” Little did we dream that this abundant “something” was to be his professional all. No pioneer embarked with greater courage and enthusiasm upon the problems that beset the new Chichester High School for Boys, combating quietly the entrenched prejudice of an ancient city against grammar school education and contributing in every field of the School’s young life his own Intellectual, athletic and social gifts. I remember with the utmost gratitude how he fathered the football and the cricket elevens and how his own powers at the wicket surprised even the arbiters of Priory Park

It was he who sustained the School’s first shock of inspection. In our second year the then Board of Education sent down Its Staff Inspector of History, one F. R. Marvin, who heaped unstinted praise upon the young teacher and from the friendly correspondence that ensued between them Chichester owed its branch of the Historical Association. I cannot recall any school activity in which Alfred did not play a major part. When we launched our excursions abroad, he was merrily to the fore in Paris, the Pyrenees, Gibraltar and North Africa. Nor did he scorn sock and buskin. When Kenneth Quick wanted someone to hold the juniors together in Dunsany’s “The Gods of the Mountain,” it was Alfred who played the crucial role. In all the ups and downs of school life we could count upon that shy, sly Northern humour, upon his wonderful gift of laughter. One looks back so happily. He endeared himself to generations of boys fortunate enough to come under his beneficent influence. Other posts, other schools never tempted him He gave his all to Chichester High School for Boys and we who remain are infinitely poorer for his passing. 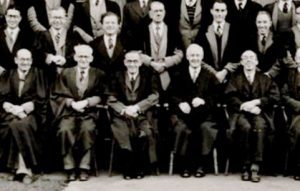 The death of Mr Alfred Scales caused shock and grief to very many people. His courtesy and cheerful good humour had won him friends everywhere in shops and clubs, in pavilion and class-room, among athletes and scholars. He himself would deplore exaggerated eulogy and would deprecate fulsome praise of his professional or sporting successes; he had an innate modesty which endeared him to those who had to strive so very hard to keep up with him in activities at which he excelled so easily.

Was good health the secret of his happy life? For years he did not miss a day at school; and, except for an occasional heavy cold which reduced him briefly to the depths of misery, he never seemed to endure aches or pains, or to know the twinges and disorders lesser folk have to suffer. This physical well-being was accompanied by a serene temperament, a well-ordered mind, a ready wit and, above all, an eager enjoyment of good-fellowship in others.

The fact that Mr. Scales, after being appointed by the first head-master Mr (now Dr) H. F Collins, never left the school he had helped to start, was largely due to the character of the community he found he had joined. Born in the industrial north and educated at Oxford, he met in the small but ancient city of Chichester a way of life he quickly learnt to love. The cricket field in the shades of the Priory ruins and the Roman wall, the golf links on the Downs, the School in sight of the Cathedral spire, and the open fields stretching away to the sea held him in thrall, and, as the years went by, although he was so richly endowed, he put aside all ideas of seeking a higher post elsewhere. But it was the friends he made that kept him in Chichester; his colleagues who shared his love of books and games, who would join him in climbing Snowdon or touring the Continent, or golfing along the coast, or spending a few days theatre-going in London.

When he retired in July 1965 at the age of sixty, Mr Scales said that he had many things to do which he had put off until he should be really free to give all his time and attention to his plans; these included an historical work on Cromwell and some rather elaborate carpentry. Later he confessed that he had not really got very far with any of his ambitious projects, but that he had thoroughly enjoyed himself wasting time. Alfred had settled down in Brighton with some old friends, and their warm affection and his own good health combined to give him a happiness which no one will begrudge him. It was not until three weeks before his death that the first grim symptoms appeared of the deadly disease which was to carry him off so swiftly; and so Alfred Scales, still without pain, still looking forward to many years of happy retirement, died peacefully on February 23rd

Many of us will remember him as one of the happiest, the most blessed of men.

There are one or two teachers on whom I look back with some affection. Among them was “Fishy Scales” my history master at grammar school. He was a charming man who assumed such an air of hurt astonishment if anyone should dare to misbehave in his class that we did not often do so. He was a brilliant teacher, and his enthusiasm for his subject was infectious. He imparted to me not only a great love of history, but of language too. He was a master of the rounded sentence, the memorable phrase and the subtly expressed idea. He would walk about the classroom repeating some phrase that had caught him in its magic. He would then twist his gown sleeve round and round his arm, raise his hand high and rush to the blackboard to write it down before it was forever lost.

I used to relish some of these sayings and repeat them to myself, copying his mellow gentlemanly voice, and imitating his gestures. He was in the grand tradition of English eccentrics. I never saw him or heard anything about him again after the edict came from my father that I would not be going back to school. I have often wondered if the whole course of my life would have been quite different had some female edition of Fishy Scales been my teacher at Infant School instead of the sour old lady who so antagonised my small being and set me on an anti-establishment course throughout my school years.