As one of the most senior members of the Air Board between 1988 and 1993, Benny Jackson was a central figure in the debate over privatisation within the RAF. Widely regarded as one of the cleverest of his Service generation, he was strong enough to take on those politicians and civil servants doctrinally committed to contracting everything out.

Yet he was by no means opposed to the policy on principle. Dedicated to eliminating waste, he achieved a great deal himself by running the RAF’s organisation and putting a number of functions out to tender. But Jackson also saw the dangers of cutting too deeply and damaging the RAF’s “core capability”. The Gulf War, in which Britain fought during his five years at the top, demonstrated the need for the service to be self-sufficient in times of crisis. There was also a fear of weakening the RAF’s esprit de corps by importing civilian contrac­tors in place of Service personnel – a consequence already perceived in Support Command. Leanness was not synonymous with fitness. 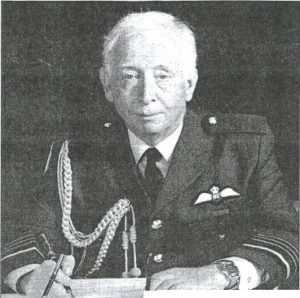 Jackson did not always win the day. He tried to oppose the scheme to centralise tri-Service helicopter maintenance under a single agency at Yeovilton, but in the end, had to concede defeat. However, he had the intellect and was tough enough to slow down the pace of change when he thought it necessary, insisting upon a more pragmatic approach.

Brendan James Jackson was born in London, the son of an Irish mother and Scottish father, an estate manager who at one time corked at Chartwell for Winston Churchill. The family later moved to Sussex where his father died, leaving him to be brought up by his mother.

He went to Chichester High School for Boys, where he soon showed a gift for languages and applied for a place at Oxford to read German. Vexed over being rejected, he thought he might try something more adventurous and chose to read Japanese instead at the School of Oriental and African Studies, London University. On graduating, he offered him­self to the Hongkong and Shanghai Bank, to work in its Tokyo office. Once more he was turned down. While a student, however, he had joined the London University Air Squadron and learnt to fly. So in 1956, he joined the RAF.

Qualifying as a bomber pilot, he was first posted to Laarbruch in West Germany. with a Canberra photo-reconnaissance squadron. From there he moved to Wintering, Northamptonshire, as co-pilot in a Victor V-bomber squadron at the height of the Cold War.

Jackson nearly lost his life when the Handley Page Victor in which he was flying, as one of a six-man crew, ran into trouble soon after take-off, when a loud detonation was heard from one of the wings. The pilot, suspecting an engine fault, put the aircraft into a steep climb so that the crew in the rear, who, unlike the pilot and co-pilot did not have ejection seats, could bale out. But the plane then began to vibrate and became uncontrollable. Shouting to the pilot that it was just about to stall, Jackson tried to seize the controls – only for the pilot beside him to grab them back, refusing to believe him. In breach of regulations, taking the law into his own hands, Jackson ejected. Seconds later the plane stalled and crashed, killing all those still on board.

Jackson next led a squadron of Canberras in Malta before becom­ing personal staff officer to the chief of staff of the 2nd Allied Tactical Air Force in Germany from 1969 to 1971. After flying B52 bombers on an exchange posting to the United States, he became personal staff officer to the Chief of Air Staff, Air Chief Marshal Sir Andrew Hum­phrey, 1974-1976. He went on to take charge of RAF Marham, a Victor tanker base.

It was as a staff officer, however, that Jackson was to make his mark. Cast in the responsible role of director of plans, he earned the title of “the man with the golden pen­”, reflecting his skill at reducing complex data into readable, lucid prose. His performance helped to earn him promotion to air vice marshal and the job of assistant chief of staff (policy) at Nato’s military head­quarters. At a time of historic movement on arms control and redeployment, he was a highly regarded aide and adviser of the Supreme Allied Commander, Gen­eral Bernard Rogers, especially on nuclear issues.

In 1986 he became the deputy commander-in-chief of RAF Strike Command and two years later moved into his last posting, as Air Member for Staff and Organisa­tion on the RAF Board. But, shortly before he retired five years ago. Jackson started to experience the first symptoms of what was to be diagnosed as motor neurone dis­ease.

Benny Jackson’s strength lay not only in his intellect, which enabled him to hold his own in matters of military theology but in the wide range of his interests. These included the arts and languages. He qualified as an interpreter in German. He never thumped the table or raised his voice but won his battles by rational argument and persistence. His refusal to let anything slip past him made him something of a senior statesman on the Air Board.

He married his wife Shirley in 1959 after meeting her through London University Air Squadron. She survives him, together with one son and a daughter.

Geoff Wills was a good friend of Brendan and his brother who was also at School. Geoff told me recently that he was once in Germany with Brendan as they were both in the University Air Squadron. At the time they were practicing flying Chipmonks. On one occasion Brendan managed to get lost and asked the Controller for a bearing to get him back to the RAF field. This was duly provided but Brendan then chose to fly the reciprical and an RAF aeroplane and pilot were sent to find him and guide him back to base. As Geoff said he may have been a brilliant brain but he was not a particularly good pilot.

The next piece tends to support this albeit in a situation where his reaction actually saved his life. http://www.rafweb.org/Biographies/Jackson_B.htm

On 20 March 1963, he was co-pilot of Victor B Mk 2, XM714 tasked with a night exercise. The normal crew of five was increased to six by a Bomber Command ‘umpire’. The aircraft had only recently been delivered to the squadron from the factory and the weather was good.  After passing 800 feet following a normal take-off Flt Lt Jackson noticed the No.2 engine fire warning light was on but told the captain that No.1 engine was on fire.

The captain noticed his error, corrected him and instructed him to advise Air Traffic Control.  The captain then told the rear crew members to check their parachutes. Jackson noticed that the undercarriage warning flag which normally activates when the speed drops below 160 knots with the undercarriage up was activated and he warned the captain accordingly. The captain replied that he was climbing for height and despite the severe juddering believed that he had sufficient speed because, it is thought, he believed he was actually flying at 100 knots faster than he was.

At around 5,000 feet the Victor turned over to port and fell away partly inverted. The captain ordered the crew to abandon the aircraft but the rear crew members were unable to do so because of the high G forces as the aircraft was spinning.  Flt Lt Jackson ejected and was unharmed but the aircraft crashed 3 1/2 miles East North East of RAF Wittering.

BA, Fellow of the Royal Society of Arts