The annual golf day was held on the Thursday before the 90th anniversary and it was hoped that with so many making the effort to come to the School for the occasion numbers would be up. Anyway, it was not to be, and one can only reflect that we had quality not quantity! Those that came were Maurice Hall, Tony Buckle, Paul Irish, David Hampton, David Harris, Tony Lanaway, Martin McGranaghan and Jim Tomkins who had come from Canada! 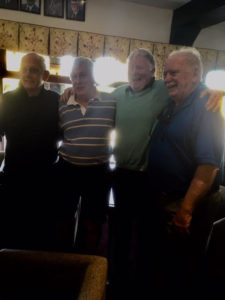 We were blessed with good weather and great humour with David Hampton just pipping Tony Lanaway to win the trophy which was made by Maurice Hall (who else); after some refreshment at the 19th hole, we went our separate ways. Some of us went out in the evening in Chichester with our other-halves and regaled each other with tales of yesteryear!