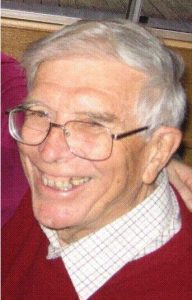 It is with great sadness that the passing of Barry Ursell (1934-2011) has been announced following a long and mentally debilitating illness. He died during the morning of Friday 14th January at a care home in Rustington with his wife Audrey and son Sean at his bedside.

Barry was the eldest of one of four brothers – Bill, who also attended the High School, Gerald and Chris. Their parents in the post-war years were the proprietors of the restaurant in Bognor Regis known as Peter Derrys.

Barry joined the High School in September 1944 and became a founder member of form 1.5 – the only year when this method of defining the first year forms was used. His progress through the school was marked mainly on the sporting side and he played for the 1st XIs at both football (association) and cricket. In his final year, the subject of Economics had been recently introduced under the tutorship of John Powicke. The first year 6th form class was limited to two pupils and it is on this basis that we developed a life-long friendship.

On leaving school, Barry enlisted for his two-year National Service obligation in the RAF and served in Malaya. There is photographic evidence available of a fully armed SAC Ursell hunting terrorists in the jungle! On returning to the UK he kept goal for Chichester, but it was the game of golf at which he excelled; following his Father as Captain of Goodwood Golf Club and subsequently being similarly followed by his son Sean. He became a lecturer in Business Studies at Crawley College of F E until his retirement

Barry was a founder member of CHALOBS and attended the initial luncheon in celebration of Frank Haill’s 90th birthday. The last recorded instance of him attending an Old Boy’s function was on the somewhat alcoholic evening canal boat cruise in 2006 so excellently organised by Colin Snook. The accompanying photograph was taken at that event.

The deepest sympathy of the Old Cicestrians is conveyed to his wife Audrey, his son Sean and his daughter Amanda; also to his grandchildren and brothers. His merciful release from suffering will undoubtedly provide a small measure of consolation to his grieving relatives and friends.