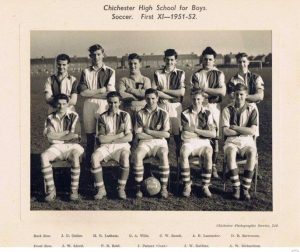 It all began for me in 1936. What a year with the Abdication and Jesse Owens winning four gold medals under Hitler’s nose at the Berlin Olympics.  Dark clouds of World War II were gathering and in 1941 my family fled Portsmouth following two massive raids by the Luftwaffe.  My dad, a Petty Officer on the destroyer HMS Vanessa, was hunting U-Boats (successfully) out in the North Atlantic.
We finished up in Bognor. At primary school I took the 11-Plus scraping through after my mother pleaded with the Headmaster. On a September morning in 1947 I lined up at the School, my skinny legs protruding from the 1st Form’s obligatory short trousers. I remember a colossus appeared at the west entrance wearing a tasselled cap.  He was Gordon Randall, the School Captain, calling the assembly to order.  So began a five year struggle with my studies.    Sport was always a distraction and I elected for Soccer and Athletics.  Progression via St Richards’s soccer elevens resulted in selection for the Colts, 2nd and 1st elevens.    I also won the Bartlett Cup, winning the intermediate 220 yards on Sports Day.  A spirited youth, I gathered my fair share of detentions and suffered the predictable humiliation at Prefects Court.
On leaving School I enrolled as one of the country’s first Police Cadets. National Service resulted in a two year posting to RAF Rheindahlen in West Germany.  On demobilisation and seeking excitement I joined the London Fire Brigade.   Stationed at the HQ station Lambeth often meant brushing with well- known figures.  Today’s hackneyed description ‘Celebrities’ had not been invented then. BBC Radio’s roving outside programme ‘Down Your Way’ team turned up one day with commentator Brian Johnson.  The programme always provided a platform for ‘Johnners’ mischievous behaviour. I joined him on the end of a charged hose line from a fire engine in the drill yard.  After I rescued him from a struggle with jet reaction he fired it in all directions, the sound of his infectious chuckling bouncing off the yards walls.   Being in an emergency service gave privileged access to important buildings and at Lambeth these included the Houses of Parliament, Westminster Abbey, Buckingham Palace, Lambeth Palace, St Thomas’s Hospital and the emerging Shell Building.  Operationally I had only one life threatening occasion when tackling a fire in the smoke filled, pressurised second Blackwall Tunnel which was under construction.
Whilst in the Brigade I was introduced to Volleyball. Watches on Stations used it as an alternative to Physical Education.   I took to the game and within two years became part of the first Amateur Volleyball Association (AVA) British Representative Team managed by Don Anthony the former Olympic hammer thrower. In a series of games we first took on the Russian Embassy at The Swiss Cottage Centre. Then played the American Air Force at the Harlow Sports Centre, a game televised on BBC’s Grandstand with commentator Alan Weeks.  Later, after intense security negotiations, I organised the Russian Embassy to play the AVA again at the Bognor College.  We were beaten on each occasion, but felt honoured to be involved at the launch of what was still a fledgling sport in Great Britain. Athletics still dominated. The London Fire Brigade held their Championships at the old White City Stadium where I won the 100 yards.  What a thrill running on a track where so many great athletes had performed. Thames Valley Harriers was my club with training out at Alperton.
Now a Graduate of the Institution of Fire Engineers I transferred to the West Sussex Fire Brigade and in 1968 attended a one year officer course at the Fire Service Staff College at Wooten House near Dorking.  This appealing old pile had been the diarist John Evelyn’s ancestral home. During the last years I became Station Fire Commander at Bognor and a fire inspection officer whose responsibilities included the Chichester Festival Theatre. There I often met Norman Siviter who as the Theatre’s ‘Friends’ Secretary had a tiny office on site. The 1987 great storm occurred during my very last weekend of service.  My retirement occupation was as an independent Fire Instructor for twenty years. I had some interesting assignments, including the Royal Opera House Covent Garden, Royal Festival Hall, Butlin’s at Bognor and both Goodwood and Stansted Houses.
For a time I brought my family up at Selsey.  Now in my mid-thirties I kicked off for the 3rd eleven notching up 28 goals in one season. At last, decades later I like to think that I had realised the potential that Frank Haill thought I had; however, his remarks in the ‘Martlet’ indicated otherwise!
Long Distance Walking. After being invited to walk the 106 mile South Downs Way, I caught the bug. In 1995 my own walking group emerged, eventually completing sixty major walks throughout the South of England over the next twelve years. Following profound life experiences, I set out in 2008 at 72 to walk round Great Britain. The rest is history (see OC’s Web Site /Newsletters/Spring 2009/scroll down to ‘Colin’s Return’). I must pay tribute to Old Boys Messrs. Doug Murgatroyd, Richard Wood-Kneller, John Smale, Rodney Bowen and Arthur Wells as well as old master Maurice Hall for arranging host families during my long trek.
I became a founder member of the Chichester Jazz Club 23 years ago, am a member of the Royal Horticultural Society and a volunteer at the Sussex Prairie Garden at Henfield, nurturing thirty thousand perennials.  Following the Old Cicestrians meeting at Goodwood in 2001, I joined Committee and am currently President.  I never ceased to be amazed at the variety of careers, achievements and significant interests of Old Boys.  After a few health setbacks I am still able to use the local gymnasium and of course carry on walking. So where on earth can one go from here? A bewildered Spike Milligan once said, as he slowly side stepped off the stage on the prompt side “What do I do now?  Keep taking the pills folks”.
Colin Snook
President
Home Articles News Events Galleries Newsletter Members Forum Links Contact