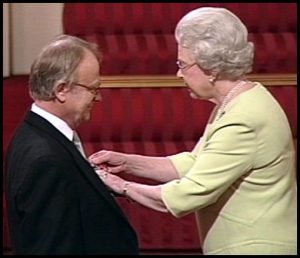 David receiving his OBE from Her Majesty the Queen in 2004

David was awarded the OBE for his contribution to Children’s Theatre and Literature in 2004. It was no surprise to many of us that knew him at school that he became a successful actor while still at Oxford University not long after leaving. He had been an outstanding talent as an amateur often getting lead roles in school productions and had been lucky enough to be in the Oxford University’s co-production with the Experimental Theatre Club at The Oxford Playhouse of  “Hang Down Your Head and Die” which was transferred to the West End. He also starred as one of the main protagonists in Lindsay Anderson’s “If” in 1969. These were pivotal events in David’s career and acting, it would seem, would be the way forward. Initially, his career was littered with not insubstantial rôles in film, theatre and television.

Let’s face it, a series of performances at the Edinburgh Festival and later in Rep at the Worcester Swan Theatre in his early 20’s, with a film like “If” behind him, would seem to augur well for an acting career in the future. Well, indeed they did! David appeared during the next ten years or so in numerous productions. He was a major player in “Aces High” – a very successful film, directed by Jack Gold and “Longitude”, produced by Granada and directed by Charles Sturridge. 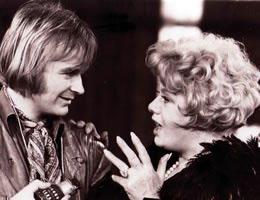 Acting in ‘The Vamp’ with Shelley Winters

In TV drama he appeared in numerous productions, often high profile, like ” Family at War”, “The Vamp” with Shelley Winters, ” Father and Sons” for the BBC directed by Paddy Russell, Disraeli for ATV directed by Claude Whatham, for the BBC in ” Hunting Tower”, ” When the Boat Goes In”, ” The Trouble-shooters”, “Z Cars “, “Dixon of Dock Green”,” Playaway” and “Jackanory”, where he appeared and also helped to write the scripts, and ” Crown Court”.

In theatre, in his very early days, he was directed by Sam Walters and Peter Wilson at the Worcester Swan theatre in Rep playing substantial roles in plays like “Twelfth Night”, “Charley’s Aunt” and “Look Back In Anger”. It was around this time that David’s talents were being noticed and after a successful run of “Voyage around my Father” at Greenwich for which he was nominated by “Play and Players” for Best Newcomer award, he was called to play the same role with Sir Michael Redgrave in Canada at The Royal Alexandra in Toronto. It was, however, writing his first Xmas play in Worcester that produced yet another epiphany and pivotal moment in his career. As a teenager, he had loved performing with children with puppet shows and as a magician. This is what he says of that time.

“This thing of doing magic at children’s parties started it off. When I went into rep at the Swan Theatre in Worcester in the mid-1960s, I went in as an actor/director. That was wonderful for me because I was only 23 or something. I would act in one play and then direct the next one. There were only two is us in that rôle, the other was Sam Walters. I also did Saturday morning children’s theatre where we did an entertainment show doing magic and things. As a result of that, a man called John Hole, who owned the theatre, asked me if I would write the Christmas play for that year, and that’s where it all started. … . Looking back, it was almost inevitable that I would concentrate on writing and performing for children because my early magic shows at birthday parties and in church-halls taught me lots about how children, en masse, react – techniques I have used ever since in my plays and books.” 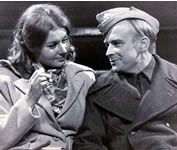 In the “Family at War” TV Series

The seeds, therefore, were sown years before as a child. His success at writing that Xmas play was a catalyst to reignite dreams he had had as a youngster and which were to lead him along a different path – into the realms of writing. On his website, he describes a visit to a pantomime whilst at Oxford. . He found himself despairing at how thin the storyline was. The full house – a matinee, mainly made up of children – became restless during lame comedy routines and insipid love songs. Towards the end, the principal comedian cracked an off-colour joke which the children wouldn’t have understood. But several adults cackled appreciatively, whereupon the comedian walked downstage, leant over the footlights, and said, “Let’s get the children out of here, then we can get started”. In the darkened auditorium he blushed and felt his hackles rising! How dare he insult the children so? He was being paid a large amount of money to entertain them, but really longed to be performing his adult cabaret act. David says he left the theatre thinking of how little real theatre for children was on offer. Occasional productions of Alice in Wonderland, The Wind in the Willows or The Wizard of Oz were available, but little original writing and virtually nothing to be seen at any time except Christmas. 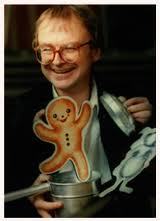 His original plays include The Gingerbread Man, The Papertown Paperchase, Hijack Over Hygenia, Nutcracker Sweet, The Plotters of Cabbage Patch Corner, The See-Saw Tree and The Selfish Shellfish. He has also adapted many children’s books into plays, including several of Roald Dahl’s stories (The BFG, James and the Giant Peach, The Witches (which has been in the West End three times) and The Twits, as well as Tom’s Midnight Garden and Babe The Sheep-Pig, and stories from Noddy, Spot and Meg and Mog for toddlers.

David Wood in a directing rôle

Many of Wood’s plays have also been adapted for schools, and his work is performed professionally all over the UK as well as by amateur companies. He also delights in visiting schools to perform and talk about his work. His film screenplays include Swallows and Amazons and Back Home, which won a gold award at the New York Film and TV Festival 1991. Wood’s writing for television includes the series Chips’ Comic, Chish ‘N’ Fips, The Gingerbread Man and Tide Race, his filmed drama for Central Television and the European Broadcasting Union, which has won several international awards. 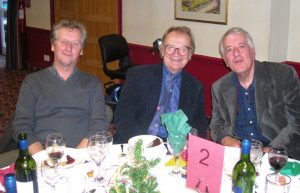 As well as being a playwright, David has also written many children’s books and recently published a book about children’s theatre. He Also set up in the 1970’s a travelling theatre company specialising in productions for children called the Whirligig Theatre. He has genuinely and rightfully earned the epithet of ‘The Bard of Children’s Theatre”.