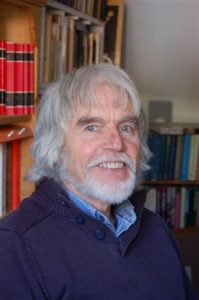 A Tribute by Jane Howells of the British Association of Local History:

In one of those unplanned, but welcome coincidences, Warwickshire featured prominently in the awards of 2012, demonstrating again the well-known strength of local history in that county. The personal achievement recipients profiled in this issue have another connection that has only just come to light, but which reinforces the characteristics we expect from our award winners.

Dr Robert Bearman is at first sight the consummate professional in our field, so should not qualify for an award at all. From 1970 he was the archivist at the Shakespeare Birthplace Trust, retiring in 2007 as Head of Archives and Local Studies. In this rôle, amongst much else, he instigated major cataloguing projects and improved reader access and services, to the benefit of many users. Close involvement with the collections in his care, led to his becoming an internationally acknowledged expert on Stratford and Shakespeare, especially Shakespearean historical biography. It was partly in recognition of his work in these areas that he was awarded an MBE in 2008.  But, as we shall see, in his own time and since retirement he has taken his knowledge and skills out into other areas of activity. 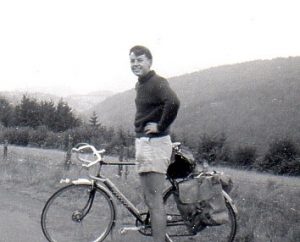 Bob Bearman in the Ardennes 1959

As a schoolboy cycling round West Sussex in the 1950s, Bob Bearman delighted in the churches he visited and the guide books he collected, (an activity to which he confesses  to be still addicted). Studying historical source material was not part of his school curriculum, so it was not until he chose the French Revolution as a special subject for his history degree at Hertford College, Oxford, that he had what he calls ‘something of a Eureka moment …the fascination of original documents first took proper hold’. His own scholarship and major publications include 12th century Devon charters  and of course many aspects of the history of Stratford-upon-Avon in Shakespeare’s time. 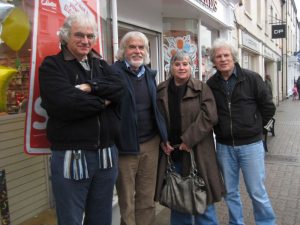 Bob 2nd from the the left with his brother, Chris far left, Shirley and eldest brother, Graham far right, in 2012

Two voluntary roles brought Dr Bearman’s attributes to the grateful attention of local historians of Warwickshire. For over forty years he has been involved with the Warwickshire Local History Society, primarily as editor of Warwickshire History. The high standards set by this publication are widely recognised. Its contents, as expressed by one of the referees, ‘give both recognition and permanence to research work, and informs and inspires our readers’. As Dr Bearman says, there are ‘local history sources, many still largely untapped, which can prove a happy hunting ground for non-professionals, providing them with an opportunity to add to the corpus of knowledge through research into highly specialised local subjects which nevertheless have an important bearing on larger issues’; and it is the resulting publication in such series as Warwickshire History that provides ‘a launch pad for people of all backgrounds and of all ages to make a real contribution to historical studies’.

Dr Bearman has also been general editor of the publications of the Dugdale Society* for just over ten years. This society exists to publish Warwickshire texts, which with scholarly but accessible editing and introductions, brings what can be difficult sources to a wider readership and allows their use by more and more people. The society’s latest volume is Bob’s own edition of the  Minutes and Accounts of the Stratford-upon-Avon Corporation 1599-1609. Apparently dry, factual, titles of record society volumes such as this disguise the delights within,  providing fresh insight into the efforts of the authorities to manage the town at a time of population increase and rising levels of poverty, vagrancy and crime.

*  The Dugdale Society, named after Warwickshire’s distinguished antiquary, Sir William Dugdale (1605-86), was founded in 1920 with the objects of publishing original documents relating to the history of the County of Warwick, fostering interest in historical records and their preservation and generally encouraging the study of local history. For many years the Society has had very close links with the Shakespeare Birthplace Trust and is grateful for the continued support of the Trust . The Society publishes, as often as its resources permit, volumes of original documents relating to the County of Warwick, together with Occasional Papers based on records relating to Warwickshire and such other record publications as may be decided upon by the Council from time to time. 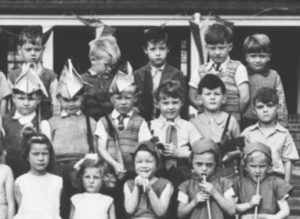 Bob was my closest friend at Chichester High School. We began our school careers at infants school in 1947 and both left school in 1962,  Bob with an “Exhibition” to Hertford College Oxford to study History and myself, a place at St. Andrews University having been in the same class throughout our 8 years at the High School. We both played Rugby and Cricket for school teams during our time there. Bob was a talented and stylish right handed batsmen with an awesome cover drive and an equally stylish inside centre who, in the words of our coach and Rugby Master, Rod Sealy, had ” a very safe pair of hands coupled with the ability to link well and effect the occasional break. These assets make him an essential member of a fast back division”. I find it sad that Bob never played any team sports after leaving university – a waste of real talent! Having said that he became an avid cyclist, cycling many miles to his work in Stratford in all weathers and setting off each year on various cycling holidays in Europe and the UK with his wife Jan. 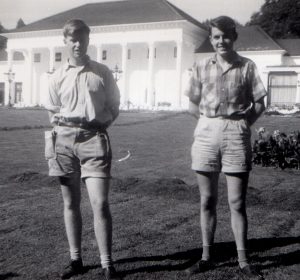 Perhaps I can claim a small part in sowing  the seed of this addiction.We had both whetted our appetites for foreign travel on a school trip in 1956 to Grasse in the Cote d’Azure. At the end of  “O” levels in 1959 we planned a two week cycling tour of Belgium and Luxembourg, meticulously organising and pre-booking our overnight stops in youth hostels. This was so successful that we followed it up the following year with a tour of the Rhine and Moselle valleys, with our friend and Rugby team mate, Tony Whitton, getting as far south as Baden Baden in the Black Forest. 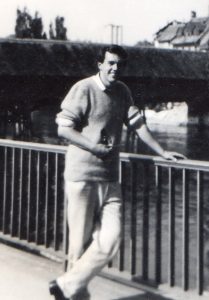 As you will see from the above tribute by Jane Howell this leisure pursuit ran concurrently with Bob’s interest in anything historical; cycling became the means by which he could visit the plethora of ancient churches dotted around West Sussex and just over the border in Hampshire. However, this mode of transport would have been, certainly for me at least, far too energetic for our next project – a tour of the ancient sites of Italy and Greece (his idea!). For this adventure we opted for hitch hiking which we managed in just under 6 weeks on £30 each.

We took a small, light weight two man tent made from redundant parachute silk  purchased from Exchange and Mart which saved us a fortune in accommodation. We were, in addition, occasionally invited to stay the night with a kind motorist or two who took pity on us; we stayed  in a nunnery on one occasion in the toe of Italy and  on others, for free, on the flat roofs of  “Tavernas” in Greece, as long as we purchased breakfast in the morning, rarely costing more than a few pence. 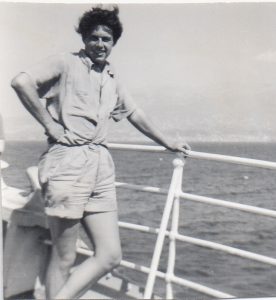 Bob on the ferry between Brindisi to Patras 1962

The only disastrous al fresco night was on our way home in Nice when we had only a few francs between us and had stood for three days outside the town without a glimmer of a lift. (France was in the middle of the Algerian War and terrorist activities were rife at that time). We slept on the beach; an idyllic setting and fairly comfortable, but we woke to find we had been bitten all over by sand flies. Impecunious, looking like tramps and with multiple bites that looked like some evil pox, we threw in the towel and walked into the office of the British Consul  who impounded our passports in return for repatriation papers, £5 worth of Francs and a return rail fare home to Dover on the understanding that the cost of this “favour” would be reimbursed within a month. It was a disappointing end to a holiday which had taken us to many of  the iconic sites of Western Europe. In those few weeks we had visited Paris, Basel, Lucerne, Bologna, Florence, Perugia, Bari, Brindisi, Patras, Daphnae, Athens, Delphi, Corinth, Epidaurus, Argos, Pompeii, Naples, Rome, Pisa, the Cinque Terra and Nice. Not bad for thirty quid! 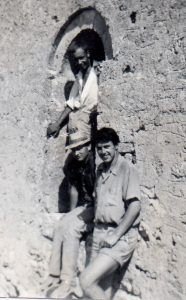 In the Autumn of 1962 Bob went off to Hertford College Oxford to study History and graduated in 1965. His first job was as an assistant librarian at the University of Sussex for a couple of years which is where I think he began his research of the Redvers family for his PhD, Richard de Redvers being one of William the Conqueror’s most trusted Barons and, probably because of his loyalty to the King, became one of the 10 wealthiest men in England. Bob’s Latin A level undoubtedly aided his researches since, I presume, most original documents available to him were in Latin. This skill also proved to be valuable in his rôle of Archivist at The Shakespeare Birthplace Trust where he would have been called upon to research ancient deeds and documents relating to Stratford. I was thrilled to read that he had been awarded the MBE for his contribution to local heritage and history in the Stratford and Warwickshire region. Furthermore there is little doubt that he has become one of the world’s experts on the life and times of Shakespeare. 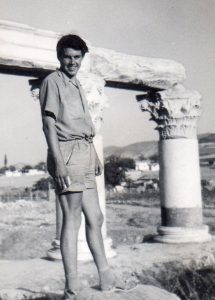 Bob and I have remained good friends over the years and have met up only occasionally but, nonetheless, have retained the same sense of fun and humour when we are together that underlies true friendship.

Bob lives near Kineton in Warwickshire with his second wife Jan, a talented and well known potter; he has three sons Crispin, Mark and Francis from a previous marriage.