The Rumpus goes to war 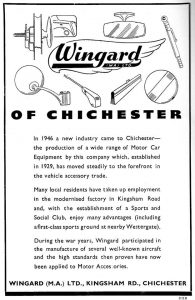 Wasn’t there a story along the lines of “the chrome stopped bonding to the base at Wingard’s? This coincided when someone retired. The company had to bring him back as they could think of nothing else that had changed. He came back, brewed the mix and all was well. It was then realised that he spat heavily nicotined spittle into the mix”. I think this may have lodged in my brain as a demonstration of catalysis.

Paul Taylor. You will have noticed that there are two Gahans in this piece: ST Gahan, always known as Giddy, and F.J. Gahan. Francis J. Gahan was the younger brother of Giddy and was a pupil at the School in the 1930s. He was a Lieutenant in the Fleet Air Arm during WW2 and died when his plane was shot down over Kilbotn, Norway on 4 May 1945 during Operation Judgement, the last allied air raid of the war in Europe. His pointless death when the war was all but over possibly explains Giddy’s bitterness and hatred of the Germans.

Ian Walters  Yes Paul, I recall an occasion when Tom Gahan said something like ‘Why so surprised? The Huns have been coming down [from the North] for at least two thousand years.’ I never knew about Francis. Explains a fair bit, I’d say. I engaged in a (handwritten) correspondence with Tom twenty years ago. He passed away, I think, at 94. His wife Barbara wrote to me subsequently. I quite liked Latin, but remain amazed at how useful a knowledge of Latin – in particular an awareness of its precision – has been to me. It has seemed to me at times as if I had an unfair advantage over those who were faced with a lifetime of trying to get their meaning across in English without the foundation of some training in Latin. Not just useful. Essential.

Mike Hancock The Facebook heading picture of the School: I remember taking Geography with Dutch through the blue door (centre of picture), and through the arch towards the sports field, our form classroom was on the right.

Colin Snook Everybody seems to remember Dutch and the Geography Room. Sadly these site images will be disappearing. Thought I would mention that I was in RAF 2nd TAF at HQ Rheindahlen 1955-1957. My school years 1947-1952.

Richard Dudley Wood-Kneller It was not just Geography, but English Language, General Knowledge and manners. A good man albeit a little daunting at first. When we clubbed together to buy him some fruit after his illness, Murgatroyd presented them and was surprised when he burst into tears.

Ralph John Lane It amazes me that there are people still alive – and posting here! – who were at the school years before I went there. Please keep ’em coming!

Colin Snook Re Dutch in tears.   I have to admit he had glimmers of emotion. One day after we had cleaned the blackboard with a moist rubber (a general instruction) he sat us down for a Q & A.   On him asking the question “Which town in England is noted for its shoe industry” I put my hand up and answered “Northampton Sir”. His facial expression half lift up as if to say “I am finally getting through to this lot” but it was gone in a nano-second.   Touching?  I owe it to him for experiencing one of my few moments of classroom triumph at School.

Mike Hancock  Some 99% of my memories of School are good. But I did fall foul of the ‘Prefects’ Court’ one year and received the cane from KD, despite my plea that one of the 3 detentions I received during the half term wasn’t my fault! However, a copy of the NME down my shreddies took some of the sting out of it!

Keith Upton Dutch was writing on the board. Cloddy was sitting at the back of the classroom, 2nd row in from the field side, desk lid up and doing his French homework. This was happening each time Dutch turned to write on the board. Well, Dutch turned towards the class and Cloddy didn’t notice! In what seemed to be one long stride Dutch flew past me down the aisle, cloak flowing behind and slammed an unaware Cloddy’s head. The rest of us were in trouble for laughing! No real harm done but imagine the complaints there would be today. I strongly believe the world would be a better place if children were disciplined today. We were fortunate to attend a really good school.