Having only just got a handle on how to access the Old Cicestrians Website and learnt only recently how to “upload” information onto it, I thought that an appropriate area of interest would be Teacher Memories. To this end, I have begun the process of collating articles we have previously published in past newsletters and, hopefully, will add others that you the readers might contribute. Please email your own memories using the facility on the Contact page.  Please also do let me have your ideas on other areas of interest.

Boys who attended CHSB at any time during the first 25 years after the Second World War will remember Frank Haill as a very popular and respected member of staff.

Frank was born in Fulham, London on 7 December 1908 and was educated at Fulham Central School where he learnt his lifetime love of poetry.   He subsequently went to St. Mark & St. John’s College, where he took a degree in French and obtained his teaching certificate.  Throughout this educational period he was able to actively pursue his love for football and cricket.  He played for Fulham in the late 1920s and captained a successful London team against Paris in 1934.

In the early 1930s Frank joined the staff at the Henry Thornton School, Clapham to teach French and Games.  He married Rosina Cox (Bunny) in August 1936 and in September 1939 they found themselves evacuated to Chichester with his school.

His two daughters were born in Chichester during the war and his son after the war.

Frank was called up for war service with the RAF in Palestine but after the war obtained a post at CHSB from January 1947 to teach French and Games.   His wartime evacuation to Chichester must have made an impression on him!

He was to remain at CHSB for the rest of his teaching career.   Boys who were successful footballers and cricketers will have particularly fond memories of the man who was responsible for the 1st. XI for both sports and gave up his Saturdays for matches.   In those less affluent times Frank supplemented his teacher’s income by coaching and marking examination papers    He played cricket for the Nomads, was Honorary Vice President of Priory Park CC and worked on the committee of the Sussex Football Association.

After retirement in 1973 he became a guide at Goodwood House, which helped satisfy a life-long interest in history.   He had joined the Goodwood Golf Club in 1966 and golf became a new passion that he followed well into his eighties and being President of the Club in 1982. 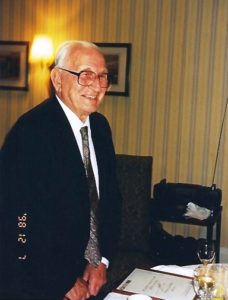