Index to items in this section:

Andrew Berriman, former Head of Sixth Form who retired in 2010, rescued a large quantity of archive material from the school when he left and has just deposited it at the West Sussex Record Office. There it will be catalogued into the CHSB collection under catalogue reference E35/N and will be available for consultation in due course.

I was able to look through Andrew’s collection before it went to WSRO and one item which caught my eye was another volume by Tony Catton, who lost his life on active service in the RAF in 1940 at the tender age of 21 and features in Colin Snook’s The Fallen project.  When he was only 15, and still at CHSB, Tony Catton wrote a book entitled In and Around Chichester for a close friend who was about to emigrate to Australia, a book which was published posthumously in Wellington, New South Wales, Australia. Copies of this are exceedingly rare (I have one of the few known ones) but this book, entitled Poems by Anthony Catton, was unknown to me. 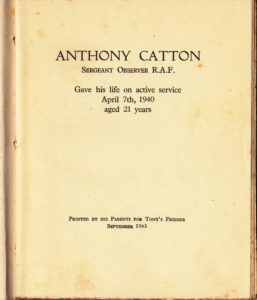 It is a slim volume of 32 pages with hardcovers and was published privately by Tony’s parents. The flyleaf (illustrated) carries a dedication to their son (here referred to as Anthony) and records his death as 7 April 1940. In the front of the book are some handwritten inscriptions as follows:

On a post-it note, there is an address label of Peter Sykes of Ettrick Road Chichester, under which is the endorsement For the school library from an ‘Old Boy’.

Just as Tony Catton’s writings on Chichester shewed incredible maturity for a 15-year old, his poems are also accomplished, and I give below one which, considering his death was not to be far off, has a particular poignancy:

The years that pass,

We are too young,

We have no need

The years that pass

And each one to another,

As though they pass

Too quickly to depart;

But lovely days with friends;

Years which a shameful act

Years of harvest gladness and prosperity,

Ever vain years of longing

For things that will not come;

And in the vague circle of eternity

Are not desired reality

By those who yearned for them,

Sufficient to be dreams and left at that.

Though the years grow quickly old,

And that time draws near, when

Unlike the trees, we end our blossoming

Grow old without young flowers in our hair

Yet we can still remember. 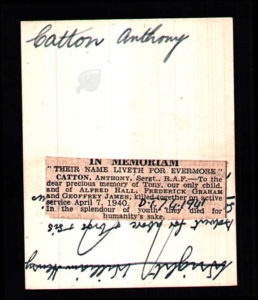 This was posted by Ian on our Facebook Wall some time ago. I thought it so good that I have included the hyperlink below and my commentary.

“Ian, this is an absolute gem! How lucky we were to live as Englishmen in England. Well-dressed, well-mannered people, no litter, no foreign motorcars to speak of; I only spotted a Renault and a couple of Volkswagens. There were no foreign restaurants and I remember the wide variety of English shops with cheerful, knowledgeable staff selling English food without spice in the baked beans. If we knew then what we know now it would have been wonderful to stop the clock and say “This is one of the best places to live in the world”. Some of us were able enough to obtain a grammar school education at a one nearby that competed with the still prestigious Manchester Grammar School; a statement that seems ludicrous today. One or two of you may care to voice a contrary opinion, but you will be hard pressed to convince me. Please do try, though!”

A Nostalgic Video of Chichester in 1962

For iPhone and iPad users

It is hoped eventually to include here links to all extant editions of the Martlet. The December 1954 Martlet was published when the new expanded House system was introduced to cope with the extra numbers of boys:

The following archive newsletters have all been converted and stored on our system as PDF files. This means that they can be printed by any member who wants a hard copy of a particular newsletter or page.  By storing them in this way they can be directly emailed to any friends, other Old Boys etc. as small files without breaking some of the many file size restrictions on the internet.

I hope these will jog a few memories and encourage members to update the details contained in these archives.

We should also remember that Doug Murgatroyd has spent many hours over the years collecting, collating and laying out all this material and it is now, in the words of one particular headmaster, “incumbent upon us” to produce the range and quality of material that Doug has given us to expect”. We owe a debt of gratitude to John Richards for starting our website and to Doug Murgatroyd for his years of work on the Newsletters and then the website.

Probably the last photographs of the old school buildings before demolition