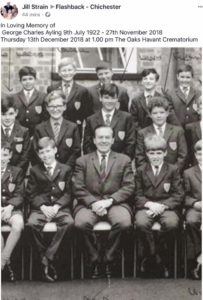 George (Adolf) joined the staff of CHSB in 1950 and served for 35 years until retiring in 1985. At the grammar school, he was the music department and had to teach in the hall as there was no dedicated music room. Things improved in the comprehensive era using the better facilities at the former Lancastrian school and he then also taught woodwork. He was organist at St Paul’s Chichester for over 40 years. He died in a nursing home on Hayling Island in December, aged 96, but sadly was too ill to attend CHSB90.
Alan Green

Thank you for circulating the date and time of George Ayling’s memorial service. Much as I would have liked to have attended, having been a pupil at CHSB on the first day of his arrival in, presumably, September 1946, I fear that my current condition following my hip replacement makes travelling not the easiest of activities. George succeeded a Mr R Robinson as master i/c music who left to become Head Master at Wells Secondary School, if my memory serves me correctly. George struck us as quite a fierce little man in a suit with a neatly tied tie – as of course was the requirement in those days for members of staff – and brylcreemed hair and trimmed moustache. His wartime activities were unknown to us. I don’t remember him having a humorous side but certainly, his bark was sharper than his bite. His teaching domain was the assembly hall in close company with the grand piano.

In much later years I had the pleasure of sitting next to him at one of our Christmas lunches and found an entirely changed character. Chatty, knowledgeable, and more than willing to happily discuss any aspects relating to music. No mention whatsoever of his wartime experiences. He obviously enjoyed life and especially that at CHSB judging from the length of service he put in. I have a feeling that such enjoyment of his post-war lifetime was based on forgiveness, strengthened in no small way by his love of music.

George Ayling, who I got to know better after I had left school rarely, if ever, spoke about his wartime experiences. I got to know him better after I had left school and joined his choir at St Paul’s. When I found out about his being in a POW camp, I felt very guilty that we knew him by his nick-name Adolf (which was on account of said moustache) which was so insensitive. At the funeral, I asked his daughter whether he knew his nick-name. He did and apparently thought it funny!

Best Wishes for the New Year.