I was borne on 10 August 1927 at the Post Office Stores, Birdham. In September 1937 I started CHSB in Form Alpha with endless arithmetic under Mr Holland. I was in Form 2B when the War started. The younger male teachers were called-up for military service and were replaced by older men or even a lady. Frequent trips to the air-raid shelters followed where we were read Tarzan stories by the form prefect. Later, half-day schooling was introduced to allow space for the Henry Thornton School (HTS) which was evacuated from Clapham in London. Please see  https://www.oldcicestrians.co.uk/old-thorntonians/ for more.

After the Americans entered the war, we were taught American history! Then in Form 6 came Pure and Applied Mathematics with Mr Stevenson and Physics and Engineering with a master whose name I cannot remember. I left CHSB in July 1945 with a London Higher Certificate and exemption from the Intermediate for a B.Sc. Engineering. In September 1945 I went up to Loughborough College only to be told that by the new government that because I had changed my place of education, I could not continue but must first do my National Service. January 6 1946, was my call-up day.  I travelled from Chichester to Stranraer where at 04.00 hours I boarded a boat for Larne.  Stormy weather meant that everyone was very seasick. The sea was too rough to dock and so we spent two hours rocking and rolling back to Stranraer. The next day a bigger boat and better weather arrived, and we reached Omaha for basic training.

I spent three months from March 1946 in Scotland training for the Royal Engineers. In June I joined the DCRE* office in Hereford and was billeted in a convalescent camp. We even had bed sheets! Then followed six weeks at the Royal Engineering Works at Chatham and I gained my first stripe. In October 1946 I moved to the British Army of the Rhine in  Hamburg as a store’s depot chief clerk. Finally, in August 1946 I was demobbed and returned to Loughborough College to study Mechanical Engineering.

I married in September and started a two-year graduate apprenticeship at English Electric Company in Rugby. I ended up in the water turbine design factory and offices and moved from Rugby to Netherton, Liverpool in 1960. We made our home in Crosby. In 1959 English Electric and Associated Electrical Industries (AEI) merged. By 1970 the factory and offices were shut down with numerous redundancies.I stayed with Company at various locations until 1974. Then I took redundancy in preference to moving to Manchester.  Shortly afterwards I received an offer of a job as CO at Kamburu underground power station, Kenya.

In July-December 1976 I was commuting on a weekly basis from Liverpool to EAPL, Sidcup. In 1977 I relocated to Tabou in the Ivory Coast to join Kaiser and Constructors Inc. of Oakland, California. Later, Acres International of Niagara Falls employed me for the next three years where I carried out a feasibility study for a small unit in Brighton Dam in Potomac River near Washington D.C. From there I moved to the Kpong Project on the Tana River, Ghana for three years as Chief Engineer, Mechanical and Electrical. What a lovely Job amongst lovely people!

I then emigrated to North West Ontario in Canada, to the Atikokan coal handling plant.  It was very cold throughout the winter months. Come 1983 and I was made redundant again and moved 1,400 miles to Oakville, West Ontario. Eventually, I obtained a post in an American car assembly plant, but this was not my field and I came home to England. Things move fast.

Hugh’s older brother Philip P. Allman (CHSB 1935-1943) also went to the School. He was killed flying his Hawker Hurricane as a Royal Air Force pilot after the war. 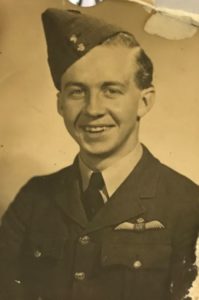 This picture was kindly recently donated by Molly, Hugh’s niece, at the CHSB90 event. RIP

*Another explanation of 150 DCRE is that, as part of the reduction of forces in Germany post-war, the Royal Engineers were reorganised into ‘Corps’ Royal Engineers’ ‘CRE’ (i.e. those parts of the REs that came under the Corps HQ and were not subordinated to any of the Divisions or Brigades. The work was mainly focussed on building/re-building military facilities post-war (rather than Combat Engineering, the role of RE units under Division and Brigade etc.) CRE work formations were based in Minden, Berlin, Dusseldorf, Schleswig, Dortmund, Hamburg and Hannover, with seventeen subordinate ‘District’ CREs (hence DCRE). 150 DCRE was in Osnabruck, I think. The DCREs were structured on military lines and made up mainly of ex-Wehrmacht personnel with a lot of work carried out bringing German barracks back into use for British Forces (some were also involved in work for the Control Commission such as accommodation in Hamburg consulates).