A British soldier photographed sticking two fingers up in defiance to his World War Two German captors has died at the age of 97. Lt Jack Reynolds – who served in the 2nd Battalion South Staffordshire Regiment – died last week. He gave the two-fingered salute to a German cameraman shortly after he was captured during the Battle of Arnhem in September 1944. 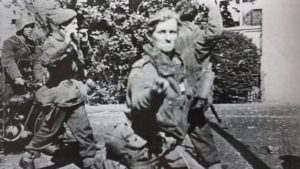 The Staffordshire Regiment Museum said the image gave him “legendary” status. The photo “embodies the spirit of airborne troops who had been through hell” as German soldiers smiled and laughed at new prisoners, the museum said. He was marched off and spent seven months in a prisoner of war camp.

Museum director Danielle Crozier said: “It’s such a powerful image. It reflects the spirit of the troops never giving up.” Niall Cherry, the honorary secretary of the Arnhem 1944 Fellowship and the Arnhem 1944 Veterans’ Club, said Mr Reynolds’ gesture was “an act of defiance from a British soldier”. Former soldiers and well-wishers on Facebook said they respected his “resilience in the face of adversity.”

In a book called Military Voices, Mr Reynolds described his gesture as a “momentary lapse of military discipline, which given the circumstance seemed totally justifiable”.

In 2009 he spoke to the Imperial War Museum about his military career.

Mr Reynolds received the Military Cross for his courage and leadership in Sicily in July 1943.

He was part of the first wave of glider-borne troops who landed at Arnhem, Holland, and carried out reconnaissance missions before he was forced to surrender when the battalion HQ was overrun.

It is understood Chichester-born Mr Reynolds died in his sleep in West Sussex on 22 August 2019.