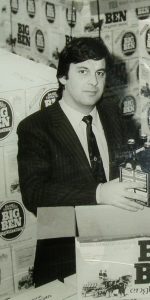 On leaving school I was a cub reporter for the Chichester Observer. Quite soon I was asked to write a weekly pop column “Flatspin”, under the name Jim Andrews – very first ‘tip for the top’ – Tom Jones ‘It’s not unusual’. This led indirectly, and through a girlfriend, to regular visits to RSG in London where one could see top acts live and up close. On one occasion, following on from seeing the Stones live in the studio, we went on to Wembley Pool to see them live again. Also on the stage – although past his best – Gene Vincent – to the young me, the night’s biggest draw.

Regular reporting duties still had to be done – one memorable occasion I was on duty on Christmas Eve when reports came in of the Chilgrove shootings. Ted Brown, the chief reporter and I high-tailed it up to Chilgrove to get the story. I have a mental picture of Ted leaping gingerly across a cowpat field to a telephone box.

I rented a flat and ran a Hillman Minx convertible all on £7 per five and a half day week.

Twelve months later – up to Manchester sharing a flat with Ian Walters (he in his final year, me in my first) He introduced me to the pick of University life and a fine-tuned selection of watering holes. We had a great time there despite the poverty and cold and I thoroughly enjoyed college life.

While still at School, I had the best of summer holiday jobs working at the Festival Theatre from the opening season as an usher/apron stage rope attendant and then off and on, up to 1968, as a scene shifter.

The year 1968/1969 saw marriage for the first time and a ‘proper’ job – initially working with a short-back-and-sides James Hunt selling telephone systems on long leases.

The early 70s saw the start of an export career – firstly packaging to an embryonic EU and then followed by six years as a brewery export manager – a new position involving start-up markets; the highlights were trading with Spain, USA and Germany. 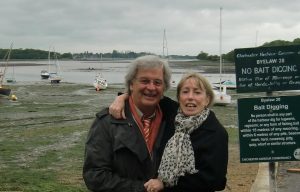 In May 1983 – a change of direction, taking the plunge, risking all – buying a lease on a large run-down pub (“We will give it three years” – “A publican’s life is incredibly hard” says Alice). It was the foundation of what proved to be a small chain of public houses and hotels in NW England and North Wales.

All were sold in the early noughties and then eleven years of ‘early retirement’ with a ten bed Georgian Bed & Breakfast on the walls in Chester – that in turn sold two years ago – now downsized to apartment living in central Chester – still with wife, a new knee, and an extended ‘modern’ family which now includes several great-grandchildren.

We spend time each year in France where my sister has lived for over 40 years. Also ‘down’ to London every 6-8 weeks (as opposed to Chichester where it was always ‘up’).

I kept up my cricket after leaving school playing for Priory Park and the Sunday Nomads side – and right up to the late 70s in Lancashire. One of my abiding memories in school cricket is motoring along on 60 when run out by Bob Pomphrey – I wonder if he still feels a small prick of conscience. Only joking Bob. It was nearly 55 years ago after all.

I’m sure I speak for others when I say it is a shock to suddenly find oneself 10 years older than Victor Meldrew. Personally – I don’t believe it.