The ‘Chi High’ overseas group, including Tony Horne, Dave Richardson, and Keith Upton has decided that, as I know more than most about John, I should put down a few observations on his 76 years. Others within our network have added anecdotes and observations.

Ormonde Avenue houses are not large – the Haines family was. However, Ken, Mavis, Margaret, John, Roger and Chris somehow managed but, after John’s encounter with polio, it could not have been easy. The house was always a happy buzz of comings and goings, with Mavis organising the set-up, and playing a big part in the conversations.

The Haines family branch, based at Itchenor, can trace its maritime past way back into history. The Haines Boatyard was a relaxed and interesting place. Messing about in boats, with John in charge, was a good way to spend a day. John took his turn in manning the foot ferry to Bosham. When a famous thespian passenger explained his vital roles at the Festival Theatre, John put on his best ‘yokel voice’ and said, ‘I hope it keeps fine for you squire’. Affectation was never high in John’s reckoning!

Following his degree at Southampton (door-to-door in a two-stroke monstrosity in 27 minutes), John was taken on by one of the largest accountancy firms in London – the co-owner just happened to have his yacht at the Boatyard.

John’s career really moved on after his firm assigned him to Swindon to set up The Book Club. W.H. Smith knew a good thing when they saw it and he was soon ensconced in offices in The Strand as Chief Accountant. On the acquisition of Doubledays, John was soon ‘Concording it’ to the Big Apple and back, much to the envy of the rest of us. Remodelling the firm meant that John was able to take advantage of a restructuring plan that set him up for early retirement in the Witterings, the idyllic seaside space where many of us spent their schooldays revising for their exams!

His house on the seafront, with balcony views from Selsey to the Isle of Wight, was magnificent.

John’s generosity to helpers, friends and relations was second to none. His Christmas bash at the local ‘Italian’ showed the full extent of his friends and acquaintances.

The range of expertise and experience at the ‘lunch club’, established over the last decade, always led to long and interesting meals. Chris Thomas, Ian Odin, Dave Wellbelove, John and I would take over a corner of a pub and cover topics in which one or other of the group had genuine in-depth knowledge. It also provided a forum for other visitors from far-flung parts of the country and the Empire, to share their knowledge too, with the odd incident of ‘men behaving badly’. But also ‘men behaving gallantly’. From the pub conservatory, we spotted a couple of ladies traversing a dwarf wall in their car and coming to rest with front wheels in mid-air. Under John’s strategic leadership, we managed to lift the car back to the right side of the wall – with applause forthcoming from the other conservatory dwellers and thanks from ‘Gert and Daisy’. 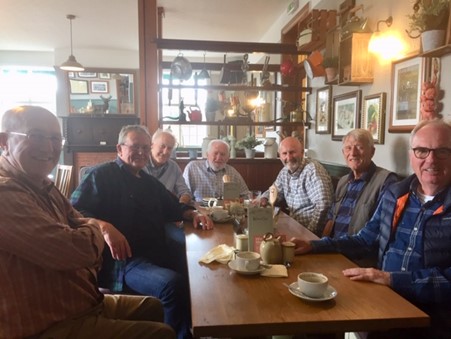 Many of John’s nameless chums have added their own anecdotes and observations as follows:

I was interested in the posting of Tony Horne.. we did an early 1yr maths a-level together with Tony Miles in 1958 (they both won oxford exhibitions the next year, leaving me in the dust)

The post said he now lived in Newcastle Australia.. I’ve been in Melbourne since 1976.. so it would be interesting to hear how he has got on over the last 60 years or so!