I attended Chi High from 1946-1954 and then studied Geology at Bristol University, qualifying in 1957.  I joined the British Overseas Geological Survey and worked in the South American bush in British Guiana (Guyana) from 1958-1961, carrying out geological mapping.  I married my wife Pat, a Guianese girl, in 1961.  We moved to London where I studied for a degree in Engineering Geology at Imperial College and joined the civil consulting engineers Sir M MacDonald & Partners (https://en.wikipedia.org/wiki/Sir_M_MacDonald_%26_Partners).

I was posted to Jordan in 1962 and worked with the firm until 1965 carrying out geological surveys of dam sites and assessing groundwater resource projects.  I was subsequently recruited by the Food and Agriculture Organisation of the United Nations and from 1965-1969 carried out a deep drilling and groundwater resources assessment of the major Cambro-Ordovician aquifer in the southern desert of Jordan, a resource now forming a major supply for the country.  While in Jordan our daughter and son were born, Pat became proficient at Arabic and while we have many happy memories of our time there we also experienced some difficult times, with the Six-Day War etc.

From 1969-1970 I completed a PhD in arid zone groundwater studies at Bristol University, having registered externally while in Jordan.  I then joined the British Institute of Geological Sciences and was posted to Chile just as Allende became President.  I worked in the Atacama Desert and valleys of the  Andes until 1973 assessing and installing water supplies for the copper industry during what proved to be a difficult political period.

In 1973 I was fortunate to be appointed to the staff of the School of Geological Sciences of the University of Birmingham and we settled in Warwickshire.  I was made responsible for the MSc in Hydrogeology and the groundwater research programme.  I was promoted to Professor of Hydrogeology in 1987  In the UK we carried out major research projects related to the groundwater resources of the Chalk and Permo-Triassic aquifers.  I worked with British Coal deep mines in water inflow assessments and was part of the Peer Review Panel for the UK nuclear waste studies.

Whilst at the University I was allowed to carry out consulting work which I continued following my retirement in 2000.  In all, I had the opportunity to carry out groundwater studies in some 35 countries varying from small Pacific and Caribbean islands to the regional continental deserts of central Australia and the Sahara.  My particular interest has always been the arid zones.  I have worked principally in the Arabian Peninsula and in North Africa for international consultants and government organisations.  In Libya, I acted as hydrogeological consultant to Brown & Root International for the major Man-Made River Project in Libya assessing the location and viability of a wellfield  (some 400 ~700m deep wells) to supply  Tripoli to the north via a 600km conveyance. 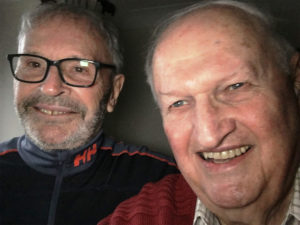 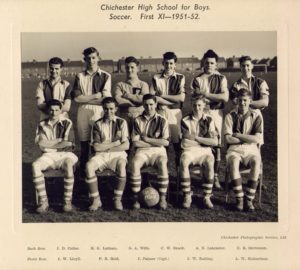 I shall always be extremely grateful to the staff of Chi High for their dedication and kindness during my period at the school and subsequently.  They provided me with an educational and social background that enabled me to pursue a fulfilling professional and an ensuing happy family life. I hope Tich would be proud of my geographical adventures and that Frank would be happy that I was still trying to kick a ball around at the age of 37.  I know Moby would be astounded that I eventually learned to apply his partial differential theories.