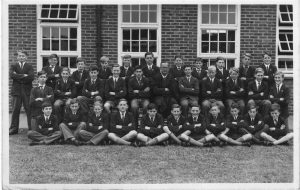 We all remember Ken (bogey) Murch as the enthusiastic, knowledgeable teacher of biology at school. Homework consisted of collecting wild mushrooms and toadstools, the largest leaves, jam jars dipped in water from woodland ponds full of water boatmen, amoebae and frog spawn which we all viewed through a microscope. This was a magical experience for us as 11 and 12 year olds. I remember the hours spent on copying and memorizing drawings of parts of the eye, the human skeleton and the various parts of plants and insects. I loved the subject so much that I joined the Junior Bug Club where we cycled off on Saturday mornings to places like Old Park Wood in Bosham and Kingley Vale to view all manner of flora and fauna. I was sold on the subject. Unfortunately my forte did not encompass the other sciences and by the 3rd year we had to decide between Arts or Science, so my choices of subject could not include Biology as an option in the 4th year for “O” level. “Bogey Murch was a born teacher and I guess many budding doctors, dentists, vets, micro biologists etc. emanating from the High School would have much to thank him for.

However, as you have read in the previous article, Ken Murch was a man of many parts. Having left Brentwood Grammar School in 1936 he went on to study at University College London where he gained a BSc and joined the RAF soon after graduating in 1939. He had a thoroughly rewarding wartime career as an instrument engineer, starting life in the ranks and eventually becoming commissioned as a Flight Lieutenant. During his war service he was variously in charge of major servicing units, chief instructor instruments, and a team member of the testing group which piloted the automatic pilot system, “George”, and flew over 200 hours in Lancasters as the Test Engineer teaching and training pilot in the use of “George”.

His love of the RAF never left him and he was commissioned as a Pilot Officer to run the CCF at the High School. Later on in retirement he spent endless hours at Tangmere Aviation Museum as a stalwart of its dedicated team. He even asked for his ashes to be scattered in the grounds of the museum at Tangmere.  It is much to his credit that he obtained a Private Pilot’s License when he was 58 years old and notwithstanding all this he still found time to become the Scout Leader of Chichester’s 8th Scout Troop.

“Give Ken a piece of wood, an elastic band and some nails and he’ll make it fly.” He truly was a legend and will be missed by many friends.