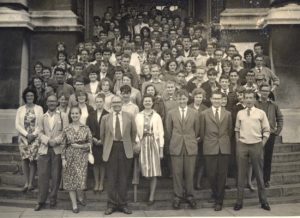 Ok, I feel I should contribute some memorabilia to this group. This is a group photo of a marine biology field course in Portsmouth (then College of Technology) in 1963. The CHSB contingent starts with the tall bloke in the open necked shirt in the third row in the middle (me) and then to the right, Chris Wood, Dave Teideman (sadly, now deceased), Platt (?), Raymond Manley, Alec Lane, the guy in the hat might be Terry Robinson. Up a row (can’t remember) and then to the left Eldridge (?). And that’s as good as my memory goes.

Ralph Lane Hi Tony! Thank you for posting this photo and for identifying Dave Teideman and Alec. I knew a Terry Robinson in those days but remember next to nothing about him. Can you?

Tony Cook, I have a (bad) photo labelled “Terry Robinson” in a canoe on a field course in 1958! I have a vague recollection that he joined the RAF but don’t quote me. As for the others… Manley and Eldridge did medicine, Platt, I think went to Nottingham to read Botany. I raked out 1958 photos of Bob Knighton and John Sutton but have no clear recollection of what happened to them.

Barry Garside Fogden Yes, that’s Bob Platt.and Ray Maley [sic]. I worked in a garage with Bob’s sister Lucille. (Honestly.) Ralph doesn’t say, but Alec is his brother! Sorry to hear about Dave Teideman — we spent a hellish summer working in a factory together, and coincidentally I spent the next summer with Terry Robinson teaching French kids English. That was a lot better!

Tony Cook Ray Maley uttered one of the best one liners I had then met. Jacko accused him of talking to himself (he always sat in the back row). He responded “I’ve got to find someone intelligent to talk to!”….. it could have been awkward if the whole class including Jacko had not descended into laughter. We were rather relaxed in 6BU in those days. Dave Teideman died during his PhD years in Bangor. We spent a lot of time together in Cambridge in one of those informal study groups that form from time to time. We spent our first-year vacation cycling in France, followed by two summers watching limpets wandering round rocks at night in Alderney. That was the start of my career in Gastropoda behaviour.
Cook, A., Bamford, O.S., Freeman, J.D.B. & Teideman, D.J. (1969) A study of the homing habit of the limpet. Animal Behaviour, 17: 330-339.

Happy days, but it did not work so well for him.

Ralph Lane Barry, did your Terry Robinson play (I don’t know which instrument) or sing in a pop group circa 1961?