Without any clear future career ambition, I left School in 1959. With a desire to fly, I applied to BEA and BOAC for a job. Because I had won the School English Reading Prize and, at my mother’s insistence, I also wrote to the BBC. My mother firmly believed that I would make an excellent radio announcer.

The latter came up trumps and in December, I started work in London as a typist in the BBC Transcription Service, a radio engineering department. After some encouragement to immerse myself in the broadcasting chain, I moved to Studio Bookings in Bush House and progressed to become a Studio Manager, with an appointment to the BBC in Belfast in 1961. There I was used as a Vision Mixer and holiday Radio and Television relief Announcer, to which much to my mother’s delight I was successfully appointed full-time,

In 1968, I transferred back to the BBC Television Centre in London where, after a short time as a BBC1 Continuity Announcer, I moved into Presentation Production. Over the next fourteen years, I progressed from Assistant Producer to Producer, Presentation Editor and finally Senior Presentation Editor. In 1986, I was headhunted to head the first Pan-European English Language Television Channel called “Super Channel”.

Having set it up, I then went freelance,  consulting for television companies – Channel 4, BSB (now Sky), Southern and Meridian – before returning to the BBC in 1992 as Executive Producer to start up a new production unit, which became the Versioning Unit. 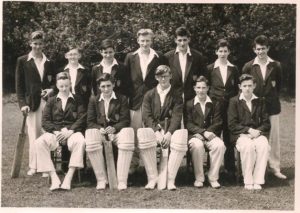 Over the next 10 years, I devised and developed ways of repackaging many BBC archive programmes, such as Holiday, Top Gear, Tomorrow’s World and Barry Norman’s Film programme for BBC World, UK Style and for BBC1 and 2. In 2001, I devised a film review programme “Talking Movies” as well as “Saturday Kitchen”; both are still being scheduled on BBC TV. In 2002, I was asked to retire; I should have left two years earlier but I slipped under the radar! I went to join London International Television (LITV), an outfit selling video production and media time for companies round the world.

When LITV went into administration, I bought it and subsequently launched my own television channel on Sky. It was called “The Business Channel” and, with initial funding from a US businessman, launched to considerable acclaim and approbation. Sadly, second round funding was not forthcoming and the channel folded in 2008. It was a unique, short but bright spark on the broadcast stage.

After a brief dalliance with some studio directing, I decided that my colourful broadcasting time was over and retired. Now, whilst occupied with some part-time work managing apartments in Kensington, where I live with my partner of twenty-four years. I am also a volunteer with Beanstalk, helping primary school children improve their reading and communication skills and imbuing them with the joys of the written and spoken word. That reading prize started the whole thing off, it would seem so, thank you, ChiHi! 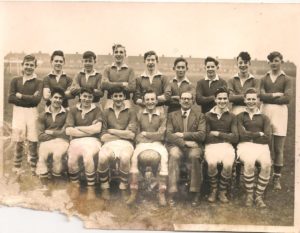 In the photographs, I am standing on the extreme right in the 1954-1955 team picture and on the extreme left in the other one. I would like to know which year this one was because all the other members of the team bar ‘Spike’, who is sitting on the grass second from left and John Dake standing third from left, are all more senior to me. ‘Spike’ is also in all photos – extreme left sitting in the 1954-5 rugby team and standing extreme right in the cricket photo. However, I do know that I played for the Colts XV in my first year and the First XV  in my second, third and fourth years, being Captain of Cricket and Rugby in 1958. Tony Easter  In the cricket photo, I am in the middle, sitting with bat and pads. John Drake is in all of them but no George Smith, who was only persuaded to play rugby in the 5th form, I think. Tony Easter took over 1st XV Rugby Captain in 1958/9 season while I played in the centre alongside George Smith with Colin, standing in the centre of the 1954 Colts team photo. I do know some other names but not sure.
I started at CHS in September 1954 as a very gawky teenager straight from boarding prep school and greeted with a chorus of laughter as I was brought to the class on my first day by K D (Anderson), the head. 4B was Mr Siviter’s class and I arrived with my school cap pulled down over my eyes – the convention was to wear them on the back of the head, exposing a length of hair at the front – and my navy blue mac belted and buttoned to the top and blinking through my NHS spectacles. I was sat right at the front and had to endure several minutes of humour from the rest of the class. My response to this came later when I demonstrated my prowess on the sports fields – rugby, cricket and athletics – over the next 4 years!