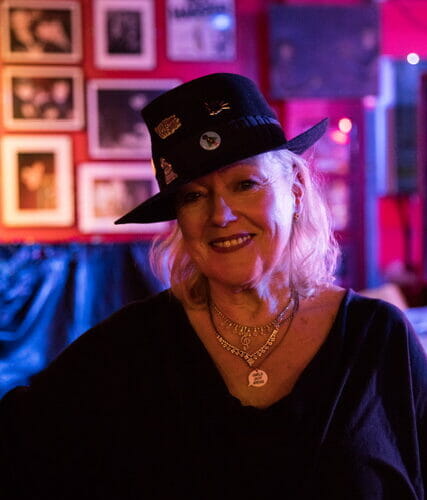 I was Alan’s girlfriend when he was in the 6th form and was Martin Lake’s sailing crew/partner. I was in touch with them  up to their disappearance. In later years, I started the first Missing People appeals on  TV  whilst a producer/director at  ITV  and then became a Vice Patron of the charity Missing People. At Alan’s family’s request I made a TV appeal . Both my brothers – Anthony and Kevin Acton (dec’d) went to Chi High. I was at Chi High Girls and invaded the boys’ school with a team of girls !  I am wondering if you can send my contact information to  the people who have written in your newsletter about Alan and Martin. They were all my friends, as Alan and I developed the Ashley House Programme; we all used to hang out together  – Jim Tompkins, Tony Lannaway, Dave Lander, Tony Horne and  Doug  Janes  etc.  I was in touch with Colin, Alan’s brother and will always continue the search  for an answer.

Alan’s influence and the plans and ideals we shared round injustice have been at the core of my entire life. He was my true soulmate. I have kept all his letters – often searching them for clues – and Martin’s postcards too!

Alan took part in workcamps abroad and I followed in his footsteps with the same organisation. I helped build a mountain road in Switzerland and a village municipal dump in France when I was 17 and a school in Morocco when I was 18. Helping to rebuild poor communities, I have Alan’s letters from the workcamps he was on and his thoughts and feelings about poverty injustice and international young people working together and ideals shared.  Sailing with Martin at Felpham Sailing Club was always a joy and, as well as winning races, we also shared similar views on life .

On a lighter note, I have tickets to Chi High Boys dances in the 60s and theatre productions at both the  school the then new Chichester Festival Theatre  (David Wood actor then playwright, a St Joan production etc.  )

On an even lighter note at 7.30am one morning I hoisted my bottle-green Chi High Girls knickers up the flag mast in front of the school thus declaring war on the Boys School.  KD ( headmaster then) and Miss Dynes ( our headmistress) were not amused but I don’t recall them knowing it was me.  I was suspended though, for invading your school St. Trininian’s style and taking the school mascot, a Teddy Bear in uniform, from the top of the grand piano.…..

Always a rebel with a cause, as was Alan and hopefully, we both still are!

From Michael Whittaker May 2019 on the OC Facebook wall

Coming recently to the Old Cicestrians web site, I read with interest and painful memory of the sad case of Martin Lake and Alan Baker.

Moving to North Bersted in summer 1955 I went to the local primary school for one year. A school with only some 125 pupils and only about 12 of us in year 6. As the new boy, Martin befriended me and I got to know him and his family (including a sister Gail? unless my memory is playing tricks) well in that year. Both passing our 11+ we went to CHSB together on the 31 bus on our first day! As it turned out we were in different classes and from that day our lives drifted apart somewhat with new friends, subjects and sports etc. Our lives became closer again in 1964 with involvement with Ashley House, the home for the very severely handicapped boys in Bognor. Alan by this time had made his mark at school through an appeal for support of a lad John who contracted polio. Alan’s appeal from the stage held some 700 of us with its sincerity. The parties held at Ashley House where several us had an involvement were memorable and very much down to Alan, Martin and the crowd from Bognor and Felpham. The sight of those lads in wheelchairs being spun around by the girls to the Beetles, Stones etc music was quite exhilarating as they literally screamed out with laughter. A summer, and girls, to remember! College days and we drifted apart again. Alan, like me, went to Nottingham but with different subjects etc contact was minimal. And the summer of ’68 brought the news that we now have. It is good to be able to look back on the happy days with 2 lovely lads. I know that whatever and wherever they went that summer they will have been bringing warmth and friendship to others.

Since my previous email, one of my colleagues has found an article on Find My Past (the genealogy website) which concerns the disappearance of your friends. The article is from the Birmingham Post and dates from Saturday 20 June 1970. I have attached a print screen, please excuse the slightly poor quality. (Editor’s note: Please see the text below)

As the article mentions that their disappearance was reported to Interpol, I would recommend contacting them. I would also recommend contacting the Bognor Observer to see if they would write an article on the case, it may be that a local resident remembers the incident or has an update. Also, it might be worth seeing if you could include an appeal for information in a parish magazine in the area.

“Help us to find our sons”

Two Bognor Regis mothers have appealed to British Universities for help in finding their student sons who disappeared in Europe 21 months ago. University sociology students and lecturers going abroad this summer, will be asked to look for clues. The missing students are Mr Alan Baker, aged 25, a Nottingham University graduate, and Mr Martin Lake, aged 24, who graduated at London University. They left Newhaven on the cross-channel ferry for Dieppe on September 15, 1968, for a hitch-hiking holiday to Avignon. Since then world-wide inquiries have been made through Scotland Yard and Interpol. The latest move in the search for the men follows a visit to Interpol headquarters in Paris by Mr lake’s father, Mr Stanley Lake, a Bognor Regis store manager.

Mr Lake said yesterday: “Interpol have already circulated information in 24 languages throughout the world.” He believes they may have been detained in Czechoslovakia.

“They were in Europe at the time of the Czech uprising, and they may have gone from Germany into Czechoslovakia to help students,” he said. A police spokesman said:

“This is a baffling case, and we hope the university appeal will provide something to assist in our inquiries”. 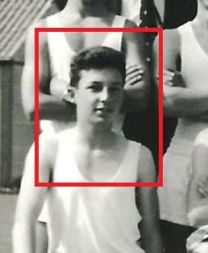 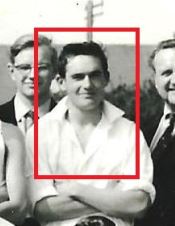 In 1968 Martin Lake and Alan Baker went on a working holiday to Europe (perhaps grape picking in France or orange picking in Spain) and simply vanished. Nothing has been heard of them since. Their families went across to Europe for many years in a row searching for them or clues as to where they might be or what happened to them, without success. It is as if they vanished from the face of planet Earth.

One can only imagine the heartache and pain suffered by their families at the time and for the rest of their lives. After all these years it is highly unlikely that this ‘missing school boys’ case will ever be solved. Martin and Alan are in the athletics photograph below and in the individual ones above.

In 2018 Keith Upton in South Africa and Dave Richardson and Tony Horne, both in Australia, decided to look for any further information in this digital information age that might only now be accessible. All three lived in the Bognor Regis area and were friends of Martin and Alan. As they were in their mid-20s at the time of their disappearance that is probably why more of our old school friends either are not aware of their disappearance or have no information surrounding their trip.

Martin and Alan departed from Newhaven on the cross-channel ferry to Dieppe on 15 September 1968, apparently hitchhiking to Avignon. The only record of their travel is a Five Pound traveller’s cheque that was signed by Martin in Paris four weeks later. Scotland Yard and Interpol were involved in a search across Europe and but no sign of the two was ever found.

The mystery thickened when Jim Tomkins wrote to say:

I am certain that it was 1963, as I had planned to go with them again (the fourth member had been Alan’s brother, Colin in 1962) but I was unable to go as was Colin. There but for the grace of God……!  We had travelled in pairs meeting up to change partners each week. In 1962 we hitch-hiked through France, Belgium, the Netherlands, Lichtenstein and Germany and thankfully came safely home.

As I remember things, was there not supposed to have been a postcard from Marseilles as the last actual contact, then nothing. All sorts of theories floated in the papers at the time;  I think the worst one was that they were making a blood donation and it all went wrong.  Jim and I came back from your wedding (in the red Mini) to a party in Bognor.  I remember Martin being there. I do remember that one of the Dads never gave up hope and searched every summer. One of lives great mysteries?

Keith published an appeal for information on the Flashback Chichester and Bognor Facebook pages and reported as follows:

There have been numerous posts in reply to the Flashback Bognor and Chichester pages, most confirming they knew about the missing lads, some knew them, some had heard about them, one lady lived next door, another saw them at her ‘hen’ party early in 1968 when they popped in to wish her all the best, and another from an ex-reporter from the Bognor Post in those early days. One suggested that Martin had a sister.

Recently Keith updated the story as under:

Nothing has been heard since last September of MARTIN LAKE (23) and ALAN BAKER (24) of Pagham Road, Pagham, when they boarded a boat at Newhaven for a hitch-hiking holiday in France. 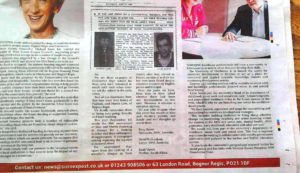 They have been friends since their school days at Chichester High School and were familiar with the difficulties involved in taking a hitch-hiking holiday abroad, having taken this sort of holiday several times since they were about 14. 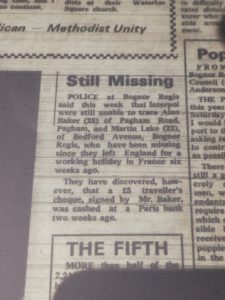 Both were graduates, Martin Lake having a B.Sc. degree in sociology at London University, and Alan Baker a B.A. degree at Nottingham in social administration. Both speak French well.

The research here is being driven by Tony Horne, my good friend from school who used to live in Felpham, now resident in Newcastle, Australia. Copied is Dave Richardson, also a friend ex CHSB now living in Australia, in the hope that he had some recollection.

The first thing that struck me was that Martin and Alan were in their mid-20s at the time and that is probably why more of our old school friends either aren’t aware of their disappearance or have any information surrounding their trip. They both lived in my area so I knew them from school and afterwards but the passing years have clouded my memory as to their ages at the time.

In my mind this occurred during the summer they left school, but clearly, it was some years later.

Czech uprising, Interpol involved…….so many questions left unanswered but we do know they set off to hitch-hike to Avignon on September 15 1968.

As I think I have said before, the Lakes lived almost opposite me at 19 Bedford Avenue (I was at No. 20). I am pretty sure that Mr Lake told me then that he had heard from Martin that they were thinking of going to Prague and so he was going to try to go there himself. The press clipping on the OC site does mention the Czech possibility. Unless I’m mistaken it was a bit more than just a thought bubble for Mr Lake.