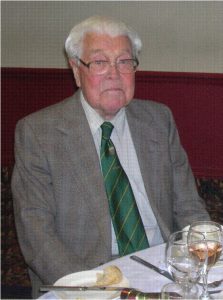 Maurice was born 1 Sep 1922 at 79 Bognor Road Chichester, to parents Lionel and Josie Evans who had met during the 1st War in France.

He had 2 younger sisters, Audrey & Mary and the family was brought up in Chichester on a nursery known as “The Peacheries”, specialising in the production of fine peaches on 600 trees under glass.

Maurice’s Grandfather George had moved to Chichester from London and bought the nursery in about 1913.  His son Lionel then ran the business for a while, and Maurice joined this business after his time at Reading University where he studied horticulture: ultimately he was to run the nursery until it closed in the early ‘60s.

As a child and throughout his life he suffered from asthma and was forever battling against shortness of breath, although improvements in treatment over the years did make life easier.

He was schooled at the Whyke Infants School in Whyke Road, the Central Boys School in New Park Road and then to the new High School for Boys in 1933.  His mémoire records  preparing to sit the “scholarship” examination:  “I remember clearly the drilling in mental arithmetic.  The mental arithmetic paper had about 20 written questions to be answered in 15 minutes.  No time for thinking just on to auto-pilot!  There must have been an English paper as well as a proper arithmetic on in the examination, but what I remember is the sheer excitement and difficulty of the mental paper”.

Due to his poor health and connection with food production he did not see active service in the war.  The Evacuation brought his future wife (Midge) to Chichester from Streatham. As a prefect at the Chichester High School for Boys he was drafted in to help the arrival of the 50 girls.  Midge had poor memories of her introduction to Chichester and remembered in her diary  “… a Gas Works which gave us our first smell of Chichester, and a very dirty square pond covered with green weed”.  Things obviously approved as a little later she was billeted with Maurice’s parents, and after a wartime courtship they were married on 25 September, 1943.

Working Life:  At the Peacheries he started working with his father in about 1942 and took over when his father retired to Cornwall around 1950.  Poor economic conditions and cheap foreign imports caused the closure of the Peacheries in 1963 whereupon Maurice moved full time to his other venture – Hoopers the Florists which had started around 1960.  His long term business partner Jean Siviter remembers that although it started as a small business it grew rapidly and soon was stretching their facility at the Butter Market in North Street.  In preparation for a large funeral Jean remembers “he sent an old van that had been at the Peacheries and said that the florists could work in that.  I was so angry that he would expect them to work in those conditions that I insisted he went to look for new premises straight away!”.  A short while later they took the lease on 14 South Street and never looked back.  Jean remembers that their first sale was an orchid which they gave away!

Maurice enjoyed opportunities for public speaking and (in the nicest possible way) telling people what to do. He indulged this in various ways: As a keen member of the Chichester Players Amateur Dramatic group; A member of the City council between 1952-1964 where one of his lasting impacts was to arrange for the planting of a Liquid Amber tree in Jubilee Gardens which is still there today; An increasing role within InterFlora and other florists associations where he delighted in membership of many committees and did much work in setting judging standards. He became a Special Constable (sergeant) in the 1970’s  .

Maurice and Midge had three Sons, Philip, David and  Simon (Simon also attending the High School for Boys 1971-1978). David was killed 1967 climbing in Switzerland, after which Maurice developed a passion for the beautiful Bernese Oberland Mountains and built a lasting friendship with the florists in Interlaken who dealt with the flowers for the funeral

They had five Grandchildren and one Great-granddaughter – Olivia born in 2008 whom he was delighted to have a chance to meet.

In In retirement he kept very busy – still attending many floristry committees much to the frustration of Midge his wife.  He took pride in his driving and was a long term member of the Institute of Advanced Motorists.  He learnt how to use a computer (”that infernal machine” as Midge called it) and kept in touch with family and friends through email, kept meticulous accounts and also took delight in working with his digital photographs – photography (especially of flowers) being another long term interest.

Maurice passed away on January 18th, 2009 after a brief battle with Pneumonia and will be greatly missed by his family, his colleagues and all who knew him.

The Rev. Ken Clinch reminisces over his friendship with Maurice Evans

I was so sorry to hear of Maurice Evans’ death, and was unable to attend his funeral,  being laid low with a dose of ‘flu-like cold. I did, however, attend his wife’s funeral last autumn. Maurice and I went back a long way, We started together, aged five, at Whyke Infants’ School and went on from there together to the Central Boys School in Chichester.

I got a scholarship there, and Maurice and I started at the newly built High School in 1933, when it was in its sixth year, and Mr Collins was still the headmaster. Maurice was a paying pupil, but we went through school together until the fifth form, when Maurice went to Fifth Science and I to Five Arts. We were in the same house (St Richard’s) together, and left school at the same time. We kept up our friendship, which had started some years before. My father worked for Maurice’s father at the Peacheries, growing fruit for the London trade, and I was a frequent visitor to his home – in the latter years we did our homework together in his father’s office – no cribbing, of course – he did science and I did arts.

We both left school at the same time in 1939, and kept up our friendship. Some months later we joined the Home Guard (Dad’s Army) together, and often found ourselves on duty at the same time, until Maurice left to go to Reading University.

Maurice, of course, was never called up due to his asthma, but I spent six years in the Army, most of it in Iraq and India. When I came out, Maurice, Midge, Geoff Barnard and I had a wonderful caravan holiday together, and when I married in 1952, Maurice was my best man and Geoff Barnard played the organ.