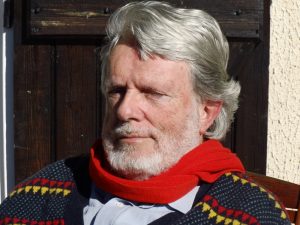 Short summary of my life since leaving the School just after Christmas 1960:

First I worked as a junior clerk at Graylingwell where I met our friend Gregson who was under treatment there; then I went up to Sidney Sussex, Cambridge to study Classics specializing in Ancient Philosophy in Part Two of the Tripos. Just before Finals 15 kilogrammes of lead drain-piping decided to drop on my head from Magdalene College roof. With the modest compensation I bought a Lambretta 150, which I took to France where I was an English assistant in the Rhone Valley, only to be involved in an almost fatal accident a few months later caused by an old guy trying to transport a tree across a main road. One week in a coma with multiple skull fractures, and altogether three months convalescence including at Combloux right opposite Mont Blanc with its unforgettable sunsets.

Then it was back to Oxford to train as a Social Worker. I finished the academic part, but decided to go back to teaching English as a Foreign Language, which I then stayed in for the rest of my career, teaching at a series of very exclusive schools (not my intention, but that is how it worked out) in Switzerland, Greece, and then back to London, where I was employed at a very good small language school in West Hampstead.

In 1971 I went off to Hamburg to marry someone I had met in London, but it was a very unhappy marriage, which broke up five years later. My relationship with my daughter has now faded away completely. Those 37-odd years were very formative: above all Hamburg has a very active rock music night life, from which I was able to profit more than if I had stayed in London (it had many concerts with the Stones, Dylan and Van Morrison, to name only three from hundreds). ):”During this period I managed to have a third near-fatal accident; on revisiting Cambridge I very nearly drowned in a punting mishap.”

Then in 2007 I had the usual old man’s cancer and decided on a radical operation to save my life. This gave me and my second German wife, with whom I have been together now for over 36 years, the chance to retire early to an isolated house in South-West France, halfway between Toulouse and the Pyrenees, which we had originally bought as a holiday home. That was almost exactly 7 years ago now. It was the best decision I ever made: warmer climate, beautiful landscape in every direction, generally very friendly, open people, tranquillity, excellent food and wine, just what we needed after our hectic city lives.

And, suddenly at the age of 65 finding myself meddling around for the first time ever with a computer, whom should I discover but Doug Murgatroyd on the Old Cicestrians’ website, with the news that Sean Irwin lives down the road! In other words, “all’s well that ends well”! I don’t intend to join Facebook myself, but if anyone should wish to get in touch, I have told Richard to pass on my e-mail address.

And by the way, do you realize that not only Tim Peake comes from Chichester?

You may find my taste in music a bit unusual, but one morning on the radio here we discovered the incredible voice of Antony Hegerty of Antony and The Johnsons, and apparently he too originated in Chichester! I have not often been back, but it is nice to be reminded now and then where it all started!