Maurice was born in 1930 into a world that would be unrecognisable today. There was 25% unemployment in the UK and workhouses had only just been abolished. One thing that hasn’t changed though is that England lost the Ashes to Australia 2-1. Quite remarkably, Don Bradman, that most famous of Australian batsmen, scored an unbelievable 2960 runs at an average of 98.7

Maurice was born in Twickenham and spent his early years within throwing distance of the famous rugby ground. I think you may have already spotted a sporting theme here. Rather less fortunately perhaps, the nearest Football League team to Twickenham was Brentford and Maurice inevitably became a supporter of the club. This meant that his children did too and both Andrew and Chris can remember dire games in Division 4 in the late 60s and 70s. Fortunately, the team’s fortunes have picked up more recently and they now play entertaining football in the Championship. Andrew still attends the home games on a pretty regular basis.

Maurice remembers one incident from the war days. He was walking home and heard a V1 bomb in the sky above. He then heard the engine cut out and watched as it fell and exploded in a nearby street.

Maurice attended school and St Mary’s Teacher Training College in the Twickenham area, and completed two years of National Service in the RAF, leaving in 1950. Subsequently, he began a teaching career which was to span a period of 35 years. While he was at college he met Betty, but, unfortunately for him, she was spoken for by one of his best friends. However, the best friend made the fatal mistake of going off to Sandhurst, and while he was away Maurice stepped up to the plate, and the rest they say is history.

Maurice married Betty on the 12th Feb 1955 at St. Margaret’s Catholic Church on what was obviously a cold and snowy day, as some of the wedding pictures show.

Maurice was a keen cricketer even at this stage of his life and played regularly for Twickenham Cricket Club as a wicketkeeper and part-time batsman.  Chris and Andrew both remember him saying that one day he scored 63 but those who saw him bat at Bognor would think this most unlikely – but more of that later. 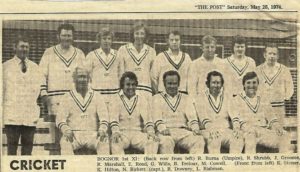 Later that year, in December, Chris was born, soon to be followed by Andrew and then by Paul. In 1957 Maurice was appointed to a teaching job at what was then called the William Fletcher Secondary Modern School and the family moved to Bognor.  Maurice subsequently moved jobs to Chichester and ended his working career teaching at the High School. He taught English, and his enthusiasm for the subject was such that, in his later years, many of his ex-pupils used to approach him and talk about how they had been encouraged to read through his teaching. It was this type of response that gave Maurice real job satisfaction. Maurice was particularly keen on poetry and Dylan Thomas was one of his favourite poets.

When Maurice was not working he was often to be seen on his BSA Bantam motorbike with Betty on the back. Well, Betty was regularly on the back of the bike until one day she fell off at a roundabout. Indeed, Chris recalls a time that he rode pillion at the age of 7 or 8 in a journey from Twickenham to Bognor, at a time long before Health and Safety regulations and helmets!

Continuing the sporting theme, Maurice played Sunday League football for a while but then took to refereeing the game instead. He rose through the ranks, and at the end of that particular part of his life, he had graduated to a Class 1 referee.

In the summertime, Maurice played cricket for Bognor, and seeing that the team already had an excellent wicketkeeper in Bob Downie, he decided to try out left-arm spin bowling. That turned out to be an inspired decision as he subsequently took more than 100 wickets in a season for 30 years in succession at Bognor. Indeed, if he could have held a bat or even been a competent fielder he would most probably have played for the county. Maurice’s batting was truly hopeless and he was especially less than keen when playing fast bowling. He often suggested to fast bowlers to pitch the ball up and he would leave a good view of the stumps while taking a swing at it from the relative safety of the square leg umpire.

The highlight of Maurice’s cricketing career was undoubtedly the year in which Bognor won the Sussex Cricket League in 1973. The team was captained by Norman Birkett, whose inspirational leadership undoubtedly made the difference.

Betty realised by now that if she was ever to see Maurice during the summer then she’d better get involved with the cricket, so for many years, she helped with preparing and serving the teas.

Betty was a keen dancer in her younger years but unfortunately, Maurice was hopeless. However, Betty recalls one cricket match when Bognor was playing the Antilles (a Caribbean team based in and around London). Once the match was over, everyone decamped to the Bali Hai club which apparently was THE place to be in Bognor on a Saturday night. It’s true to say that our Caribbean friends love dancing and Betty has happy memories of dancing for many hours that night.

The social life after the game was also important to Maurice. Andrew recalls the day that Pat Hudson was batting with Maurice. They were the last pair in and batting to save the game. At the end of one over, Maurice nonchalantly walked up to Pat’s end. Now Pat was expecting to get some advice on how to survive the next over. Not a bit of it – Maurice said to Pat ‘I think we’ll stop at the Black Horse on the way home’. Chris also recalls a number of riotous nights with touring teams, involving a whole range of drinking games. There was one evening when Chris witnessed Maurice downing a number of tequila slammers for the first and only time in his life.

Maurice was a pretty temperate character both on and off the cricket field although Andrew recalls one day which truly tested his patience. He’d had eight catches dropped off his bowling at one stage at East Grinstead and in desperation he sent Andrew out to the boundary to field. Fortunately for Andrew, he managed to cling on to three catches and Bognor eventually won the game.

Maurice enjoyed playing cricket with his three sons, but it was not often they got to play in the same team. However, there was one mid-week game where Andrew and Chris scored most of the runs and Paul and Maurice took most of the wickets. At the end of the game, the opposition captain joked that his team would only play Bognor again if the Cowell family were away on holiday.

Very sadly, Paul’s life was cut short in a tragic car accident and as many of you will know he is buried in this churchyard, so it is very fitting that Maurice’s service of thanksgiving is held here at St Mary the Virgin.

Continuing the sporting theme, Maurice was also a keen golfer and played once a week with his very close friend, Derek Biggs. Derek always took the Friday afternoon out of his dental schedule to play. Once the golf was over then in the winter months the darts league was next, although I don’t think the Bognor Cricket Club darts team ever quite made the dizzy heights.

Maurice has been a delight with all of his grandchildren and his great-grandchild and was a brilliant story-teller. Chris recalls the time when friends had been invited to a drinks party in Cheshire and after a couple of hours, one of the parents went to see what the children were getting up to, as they had been so quiet. She found that they were all sitting around Maurice, captivated, listening to him recount Watership Down without the aid of a book.

Maurice kept his brain active in retirement by completing the Telegraph crossword. He was also an enthusiastic pub quizzer aided and
abetted by Jean and Roger Dorey, so long as the pub met his exacting
standards for the quality of its real ale.

At the end, Maurice remained cheerful despite a very difficult last few months. He continued to read, one of his life’s great pleasures, almost to the end. He was delighted to be discharged from hospital in time for Christmas. He said the time he spent in hospital was the longest he had been away from Betty during their marriage. Maurice was alive to celebrate his 63rd Wedding Anniversary with Betty over a glass of champagne and waved a £20 note at Andrew to go and buy some flowers in celebration.

I think you would all agree that Maurice had a pretty good innings.