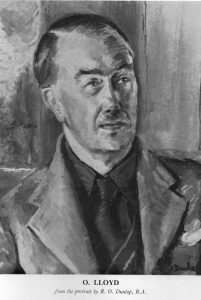 Mr Lloyd is leaving us after thirteen years, and the School is poorer for his going. In a common-room as rich as any in character and accomplishment Mr Lloyd held a special place, and the memory of ‘his shrewd and genial talk will linger for a long time with his colleagues. What rich stores of reminiscence he had to draw upon! His boyhood in Gloucester with its long tradition of cricket and rugby football to which his school, the Crypt School, has given so much, bred in him a love of sport in the sense, now increasingly rare, of the carefree brilliance of the distinguished amateur; the man who never trained but would treat the fastest bowling on an undoctored pitch with impudent hostility, or would go for the line, hell for leather, undaunted by wily and sinewy defenders from Swansea or Cardiff. In Mr Lloyd’s mind the swift feet of Stanley Cook and D. R. Gent still flicker over the good Kingsham turf, and prodigious sixes have not ceased to soar from the bat of the fabulous Jessop.

Both grim and gay are Mr Lloyd’s of the First World War in which he was himself so badly hurt. How vividly be makes them live again, those incredible colonels, those raucous Liverpool sergeants The very tones of their voices arc brought to our ears as we hear the stories of their heroisms, their tragedies and most of all their oddities His recollection is the alembic that distils the haphazard infinitely tedious years of trench warfare into an after-lunch story with mellow humour and humanity.

Between the wars Mr Lloyd worked in Malaya in the Colonial Education Service and was introduced to a way of life he was especially well-fitted to enjoy. Essentially English he yet savoured with enormous relish the diversity of race and religion the vast range of culture and habit to be found in Singapore. Sikhs and Chinese, Portuguese and Jews, priests and pagans, sinners and saints furnished a kaleidoscopic, infinitely varied delight to his quick eye and ready wit; among his colleagues too he found not a uniform colourless type but idealists and rogues whose quirks of character lose nothing in Mr Lloyd’s tenacious memory. “Heaven save us from the schoolmaster who is that and that only!” The tedious pedagogue (‘a man among boys and a boy among men’) is probably no more wearisome than others whose interests’ arc confined to their professional speciality. Mr Lloyd’s avocations are so numerous that he is in no danger of incurring these reproaches. As a contributor to his favourite south country newspaper be is a familiar and respected figure at all First Nights in and around Bognor, and he criticises both professional and amateur productions with acumen and wit. He signs his column ‘Strix” (translated by Liddle and Scott as ‘night-bird’). This is not intended to refer to his own nocturnal activities so much as to the verses which are a feature of his contribution. They have grace, point and vigour and are far from suggesting a screech-owl, vampire or harpy (cf Lewis and Short). They show that Mr Lloyd has lost none of the skill in versifying that has made him a contributor to the pages of Punch and the Spectator

An intense interest in people and a genuine altruism has led Mr Lloyd to give a great deal of time and energy to the Boy Scouts movement, the St John’s Parochial Council, the Workers’ Education Association, the Diocesan Marriage Guidance Council, United Nations’ Association, the Ratepayers’ Association, of which he has been Chairman; in fact, wherever there is a worthy cause, he is sure to be roped in.

You may find him in the bar of the House of Commons, backstage with the ‘Dazzle’ Concert Party, taking tea in the Deanery garden or port in the Senior Common-room. But of all his memories of people and places there is one he particularly treasures: the occasion when he was asked to speak at a luncheon party celebrating Hilaire Belloc’s birthday. His speech gave immense pleasure to the poet, and it was deeply affecting to see Belloc moved to tears by his friends’ sincere admiration and love, to which Mr Lloyd gave warm and felicitous expression.

The name suggests a Welshman, and he boasts Scottish descent upon the distaff side, but to all who know him Mr Lloyd is invincibly English. He retains much of Gloucester in his speech, and in all his many-sided activities he wears the ineradicable stain of his Englishry. Broadly tolerant, but with a touch of obstinacy; scornful of fuss, but meticulous and exact in scholarship, he combines the opposed qualities that make a fully developed and a very human person. In his retirement we will not wish him leisure, but further opportunity to use his ample gifts of mind and spirit; and we know that as the years go by, Mr Lloyd, the friendliest of men, will think not unkindly of us all, smiling at our foibles and judging us with greater charity than we deserve.