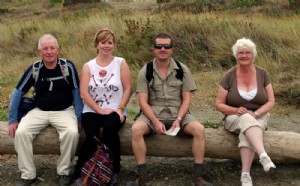 Paul and his family

On leaving school in 1962 I went to work in the City of London for a wheat and grain buying firm.  At a party in Datchet in late ’63 I met with two friends from school, Lew Bell and Alan Polson, and we all decided that we had had enough of working in London and were going to apply for university.

I went to Edinburgh University and fell in love with Scotland.  However, after University I went to Winnipeg, Canada to do my teacher training at the University of Manitoba.  I then taught English in northern Manitoba for a bit, teaching Cree native children and the sons and daughters of men who were building hydro-electric dams on the Nelson River, about 80 miles south of Churchill on the Hudson Bay.

I then returned to Scotland, where I have lived ever since and where I taught History, there being no English teaching vacancies available in Edinburgh at that time.  I met my wife, Jean, at the school that we were both teaching at in Edinburgh and we married in 1975.  I taught at various schools in Edinburgh and West Lothian until being appointed as Head Teacher of a secondary school in Dundee in 1994.  We moved from the Lothians to Ceres, Fife where we have lived ever since, although we also have a small cottage in West Lothian.In 2001 I went to work as a lecturer at Dundee University before eventually retiring at the end of 2003.

I keep myself busy with hill-walking, birding, photography and gardening.  Every 18 months a number of us from Bognor who went to Chichester High School meet up for a reunion and walks over the Downs – Lew Bell, Barry Cooper, Jez Parry, Dennis Ford, Pat Hastings, Graham Joliffe, Pete Spall, Colin John and on one occasion Alan Polson from the States.

We have two children: John is a Senior Research Fellow at the Institute of Aquaculture at the University of Stirling and my daughter Kirsty is a director of a Landscape Architecture company.