A 125-Wing operation from Celle, Germany, on 24 April 1945 is still vivid in the memory of 95-year-old Warrant Officer (Ret) Peter Hale RAF. He clearly recalls how the Wing, led by Group Captain ‘Johnnie’ Johnson, headed east towards Berlin on reports of a large concentration of airborne German aircraft only to find that they were in fact Russian Air Force aircraft attacking retreating German troops around 35km west-northwest of Berlin.

Peter, then a 22-year-old NCO pilot on 41 Squadron, recalls the sight: “They were all over the sky with no obvious formation. They suddenly appeared in the sky like a swarm of bees.” 41 Squadron then proceeded to join the Russians in their ground attacks in what was the first, and ultimately one of the only, contacts between RAF and Russian fighters of the war.

Peter had joined the RAF in January 1941 and undertook his elementary flying training in England before being shipped to Canada to undertake his service flying training. However, rather than being sent home to fight after receiving his Wings in April 1942, he was retained in Canada for 18 months as a staff pilot and instructor. He was finally released in October 1943 and returned home from New York on the majestic troopship Queen Mary.

Peter then undertook his operational and advanced flying training and was not posted to his first and indeed only operational unit, 41 (Spitfire) Squadron, until early August 1944, by which time he had been promoted to Warrant Officer and the second front had been firmly established in France.

However, from this point forward, Peter was in the thick of the action, commencing with anti-Diver (V1) patrols over southeast England, closely followed by the hunt for V2 and V3 sites, escorts to USAAF bombers involved in the Oil Campaign, and air support for Operation Market Garden to Arnhem.

Number 41 Squadron moved to the Continent in December 1944, and spent the ensuing months venturing deeper into Germany, mainly deployed on attacking ground targets behind the front. They were also regularly involved in brief but aggressive air-to-air combats. In mid-April 1945, 41 Squadron moved to Celle Aerodrome in Germany, approximately 225km west of Berlin, becoming one of the first Allied air units to be based east of the Weser.

On 5 May 1945, when hostilities ceased in north-western Germany, Peter missed out on celebrations. Much to his bitter disappointment, he was sent home on leave and returned on 14 May to find the Squadron had moved to Copenhagen. He remained with 41 Squadron until August and was then posted out to India. Returning home in time for Christmas 1945, he was demobilised in June 1946. Peter spent the next 35 years with the Met Office but did not fly a Spitfire ever again. An Unforgettable 95th Birthday.

On 14 July, to celebrate his 95th birthday, Peter was given a special treat when Mark Hillier arranged to have Peter taken up in the backseat of a Spitfire by his colleagues at Boultbee Flying Academy at Goodwood Aerodrome. 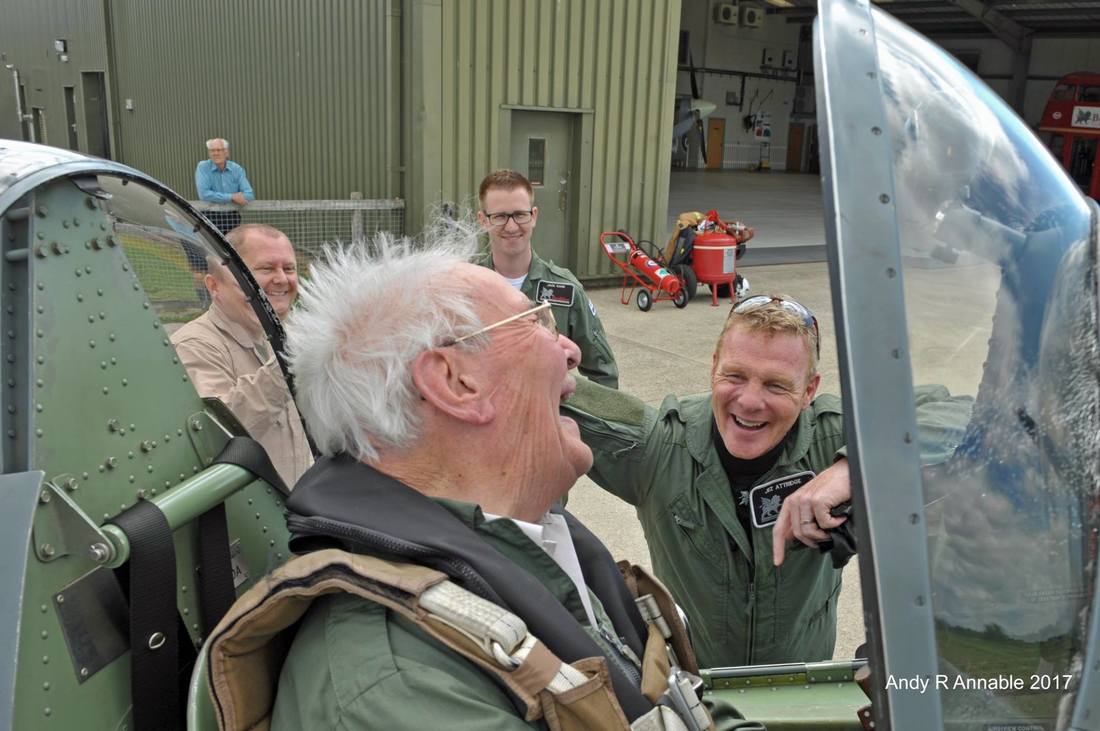 Whilst Peter had had the opportunity to sit in stationary Spitfires in the intervening years, this was the first time he had flown in a Spitfire since 1945.