Having only just got a handle on how to access the Old Cicestrians Website and learnt only recently how to “upload” information onto it, I thought that an appropriate area of interest would be Teacher Memories. To this end, I have begun the process of collating articles we have previously published in past newsletters and, hopefully, will add others that you the readers might contribute.  If you email the webmaster with your own memories I would easily be able to paste them directly into this section of our website. Also, do let me have your ideas on other areas of interest.

It was a sad moment at the end of 2009 when the Old Cicestrians’ Committee received Peter’s resignation, but we were devastated to learn, within a few months, of his death. He had been suffering from the very debilitating Motor Neurone Disease which he bore with remarkable stoicism and not a little humour which would not come as a great surprise to all that knew him well. Those of us that knew Peter as a school friend, a colleague at work or family friend will remember him for his energy, enthusiasm and sense of humour.

Peter’s connection to the Old Cicestrians must be almost unique in that he qualified on two counts in that he was not only a pupil but also as a master at the school.

He was almost an “all Sussex” man in that he was evacuated to Littlehampton in 1939 and shortly after moved to Bognor, attending Nyewood School before moving on to the School which he attended from 1942-1948.

He then joined the Civil Service briefly before doing his National Service in the RAF where he became a Sergeant in the Education Branch. On release, he attended Bognor Teacher Training College before going on to St Luke’s Exeter for his PE qualification. His first teaching post was at Edmonton Grammar School followed by promotion as Head of PE at The Lancastrian School which had recently moved to its new location adjacent to our School. When the two schools merged in 1971 he continued with PE, but then had a year at Shoreditch College where he qualified to teach Technical Studies which he taught until his retirement in 1987.

Our thoughts go out to his wife “Bubbles” and his family whom he adored. 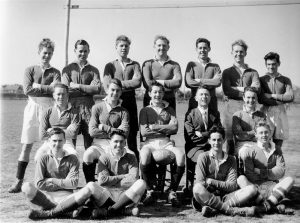 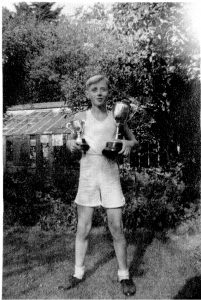