Extract of a letter from Tony Keating:
Sadly, Peter Thompson died on 20th December,2020. So sad to see yet another of the old stalwarts go. I am sure you will all have many happy memories of our old School Captain!

Peter was born on the 29th July 1938 in Chichester, the only child of Arthur James Malcolm (Jim) Thompson and Ada Mabel née Coffey, who had married in 1937. Peter had come from a large family.  Jim had two brothers, who had three children and Ada had seven brothers and sisters, who between them gave Peter fourteen cousins and to this day there are cousins all over the United Kingdom and we welcome those; who have joined us by the video link.

Peter was educated in Chichester, firstly at the Rumboldswhyke school, where he and Diana met as little ones.  Peter then went on to The Central Boys School, which was in New Park Road and eventually on to the Boys High school, where he rose to the giddy heights of School Captain. 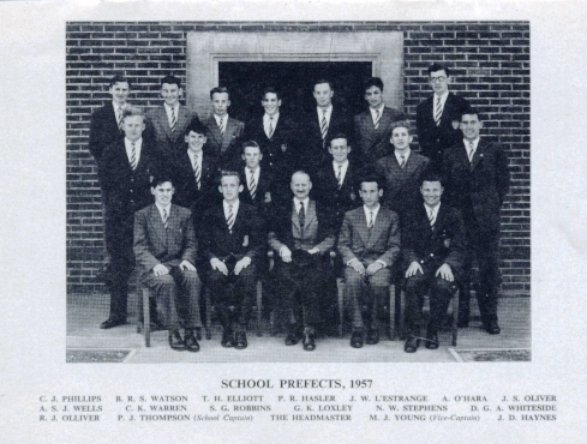 He was always interested in sport, playing football in goal for the King’s Head and sometimes for Chichester City Football club B Team, but cricket became his first love playing for Chichester Nomads and Chichester Priory Park Colts and then moving on to Priory Park 2nd Team and the Sunday side, for the rest of his cricket career. At the High School, he was Captain of the 1st Eleven and opened the bowling.  His great friend John Miller opened the batting.  There he held the record for throwing the cricket ball. 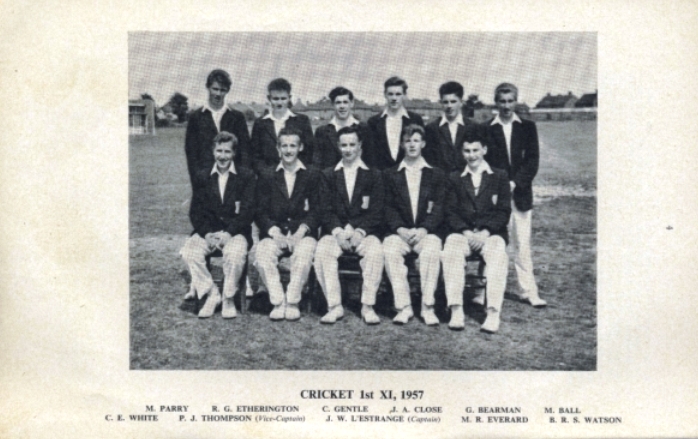 Thommo was a bright lad and loved languages and after school, he went to University College London to study modern languages.  He loved travelling and spent lots of his holidays working as a courier for coach holiday companies travelling all over Europe.  For a time he went to college in Grenoble.

He then joined Proctor and Gamble, and on the 25th May 1963 married the little girl he had met when they were tiny and whom he used to wave to from his bedroom window; when their parents lived in Whyke Road.  They firstly lived in Kent for a couple of years and then returned to Chichester, buying the house in St Georges Drive in 1965, which was their home for the rest of their lives.

Thommo always had big hands and fielded in the gully and to this day when watching cricket and a sharp chance is put down, we all shout ‘Thommo would have caught it!!’  We also remember the sigh from Diana as he dived for a catch and stood up sporting trousers with green stains all over from the grass but as he worked for Proctor and Gamble there was always a product ready for the washing.  His Proctor and Gamble family were a big part of his life and he kept in touch with them after retirement.  They used to meet up firstly once a year and latterly twice a year.  We have had some wonderful conversations with them since Peter died, he was definitely part of the team.

Peter and Diana travelled all over the continent and further afield with Cricket Tours to South Africa and Barbados.

Peter retired on the 23rd December 1993. After this life settled into e steady rhythm, he loved watching cricket and Cycling on the television.  Together with Margaret and Nigel Hillier and Sue and Adrian Price they had had some memorable holidays also visits to Diana’s niece Julie and her husband Terry in Spain and the New Forest for dog sitting.  They loved animals and had their own dog Susie for many years.  Lily, our little terrier became a firm favourite over the 15 years we had her.

He and Diana were very much a unit and her death on the 23rd July 2020 was a hard blow.  All his friends did their best to jolly him along but his health and Diana’s death had all taken its toll. Peter and Diana were wonderful, loyal friends and they will be greatly missed by us all.  Now he has been reunited with her; they were both born in the same year and died in the same year.

Editor’s note: I remember Peter well as he chaired the Prefects’ Court at which I was sentenced to three of the best, administered by KD. Many years later I reminded him of this at a Christmas Dinner and he was mortified to remember such times! On the other hand, I had to tell him how grateful I was for this short, sharp shock to get me back on the straight and narrow! RDWK