Not having been in tune with the sporty ethos of the school, and not having had a “career” worthy of such a grand title, I wonder if I have had a life at all in the CHSB sense.

Life is a philosophical journey. Some guys seem to manage theirs side-by-side with career and family, but for me, the philosophical journey is pretty much the whole schtick, which makes me something of an unreconstructed hippy wastrel. Never let it be thought that I am criticising the school. All institutions have to operate according to certain codes and assumptions, and I might not have been any happier with a more liberal institution. Having taught in several 11-16 mixed comprehensives, I do see the educational value of mixed-sex schools. 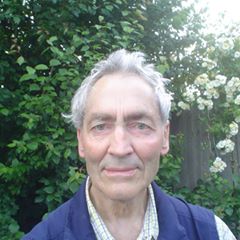 I finished at Cambridge in 1970, with much book-learning and zero knowledge of life. I had no aim, so no reason to leave the city for another year. In those days it was still possible to “drift into teaching”, so I did one year of teacher training (1971-1972) in Winchester. One of my teaching practice schools actually wanted me back! So it was that I taught French and German in Whitchurch, Hampshire in 1972-1974. I did not like the work, and I could not live on the money. In 1974 I went to throw carpets around in a factory in Romsey and stayed until 1978. That comfortably solved the financial problem. It might have helped with the existential-philosophical one. I developed a strong desire to teach again, but nobody was going to give me a permanent job after such a nose-thumbing career break, so I had to do supply teaching, which is indeed a baptism of fire. In the end, I taught various subjects in 1978-1979 at Stockbridge in Hampshire. Yes, I fetched up in some fabulous places.

My last actual paid job was at Thornden School, Chandlersford near Eastleigh in Hampshire from 1979 to 1993. Despite the obvious stresses of any job that involves people, I stuck at it. In 1993 I left because of “health and mobility problems” and never did paid work again.

I met my wife in 2003 and we are still together. I lived in Southampton from 1981 to 2007 then my wife and I moved to our present home in Pevensey Bay.

It was (apparently) assumed that university would lead inevitably to a career. I have never seen the connection between education and paid employment, but I appreciate being educated.