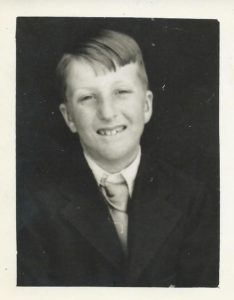 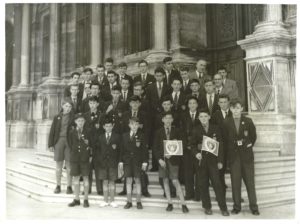 Robert is in the second row from front, second from right

As regards Robert, he moved to Reading after one year of “A” levels at Chichester and finished them at Reading Technical College. After a gap year during which he worked for Boots the Chemists, he went up to Leicester University and qualified as a Pharmacist. He returned to Reading and worked first as an assistant manager for Boots, then for a time as a relief pharmacist in Berkshire and Oxfordshire followed by a move to Swindon, where he bought his first house. As we were living in Devon he was able to move to Plymouth in 1977 as manager of their store in Mutley Plain, and he lived in Saltash. He had spinal scoliosis, and increasing chest problems led to his retirement on health grounds in 1997.

Unmarried, he was a keen traveller and visited many countries, including the US, Canada, India, China and Egypt as well as most of Europe, but especially France. Through evening classes he became almost fluent in French.  He was on the Committee and Hon. Treasurer for a time at the Swarthmore Centre where the classes were held, and he was also a great supporter of The Cavitron Fund charity, which raised large sums for the provision of the most up-to-date equipment for Neurosurgery at Derriford Hospital in Plymouth. He became a keen potter, with decorated tankards a speciality. He was a kind and generous uncle to my two sons, his Godchildren.

I hope this may be of interest to you and your fellow alumni.

Paul Taylor, I remember Bob Harman. His nickname was Schnozzle after Schnozzle Durante on account of his nose.