I believe the dates of these two photographs to be correct but I am not 100 per cent sure. They could be a year later in each case. The names are written in ink on the form photograph, so if they are not too clear, I will try to summarise below: (from left) 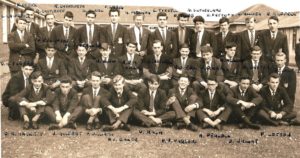 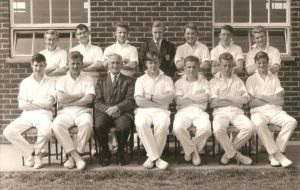 Several of us made up a school guitar group called ‘Nick, Satan & the Phantoms’

Since 1975, I have been in Norway working in the North Sea oil industry. I retired in 2011 and still live here. My two older brothers, Alan and Ray, both went to CHSB during and after World War Two. Ray Chynoweth became Head Boy. Alan Chynoweth became a famous scientist in the USA and still has a flat he visits regularly in Fishbourne (even at the age of 90). My two sons, Stephen and Peter, also went to CHSB.

A footnote to the guitar group story:
The band first played during the break at a school dance in the Assembly Hall in 1962. The first tune was a creepy instrumental called ‘Night of the Vampire’. We wore Klu Klux Klan hoods (made by my mother), and the school skeleton was hoisted slowly up through the trap door in the stage lit by blue and green spotlights. It was an early attempt at stage effects.

The last performance was in the summer of 1964 before everyone scattered to university. We hired Donnington Hall in Birdham Road and had a great evening with many school members present. The singer’s family had moved to Brighton, so the singing was by me and the rhythm guitarist. We had a ‘guest appearance’ from Doug Murgatroyd who sang rock ‘n roll very enthusiastically, but we had to stop him when he started whirling the microphone in the air round his head like Roger Daltrey in ‘The Who’. John Gilbert made a sound recording of part of the evening, but this is long lost.