The picture shews four caps and I am pleased to have had the following input from old boys: 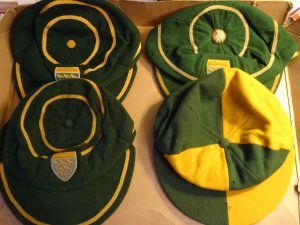 As I remember it, the ordinary school cap was plain green; the prefect’s cap had the yellow circles (as in photograph lower left) but still retained the central green button.  The school captain had a yellow tassel and a central yellow button – so the top right cap in the photograph looks like a captain’s cap that has lost its tassel but kept its button.  The school vice-captain had a blue tassel and I have a vague memory that It was proposed that the deputy vice-captain position as introduced by Mr Anderson should have a green tassel.  The upper left cap looks a bit odd – l do not remember the small yellow central button.  The lower right cap with the green and yellow quarters was the cap worn by those members of the school cricket XI who had been awarded their colours.  I have just checked in The Martlet for July 1954, in which there is a team photograph. Messrs. Chris Baldwin, Pat Anderson, Bob Downie and John Page are all wearing such caps.

The two caps on the left are the same – prefects caps – the top right is probably that of the school captain with the yellow tassel removed (blue for the vice -captain) and that on the bottom right is the cricket cap provided when “colours” were awarded.

Full prefects had three rings on their caps, sub-prefects two and junior sub-prefects, just the one. The school captain had a yellow tassel on his three ringed caps and the vice-captain a blue one.

The ties were different for prefects. Was it a broad silver stripe for some? I certainly had a blue tie with martlets on it until recently.There were broad stripe ties for prefects and less broad stripes for sub-prefects.