Maurice Hall remembers Taff, his staff room colleague and friend, with great affection. He recalled the day he arrived at the School – a young blood just returned from Cyprus where he served with the RAF during National Service as a commissioned officer. Undoubtedly, his reputation for having played for Swansea and captaining the RAF rugby XV in Cyprus plus his tough powerful build and his, at times, long flowing fair hair, gave notice that Chi Hi had taken a character on board. The Borgward Car, his eccentric, natty dress style, his powerfully melodic Welsh accent and his easy, but occasionally explosive, teaching style and his sense of fun endeared him to his students straight away.

He was variously known as “Taffy”, “The Red Baron”, “The Baron” and “The Baron von Taff”. An artist and a craftsman, Neville threw himself into his work with unbridled enthusiasm introducing students to a variety of media, techniques and skills. Doug Murgatroyd recalls two memorable trips with the sixth form where they were treated to visits to the Tate and National Galleries under Taff’s guidance followed by an evening at Ronnie Scott’s jazz club.

Doug still remembers his droll but informative commentary at the Picasso exhibition where Taff concluded that although Picasso was a great artist and innovator, there was also something of a conman in him, too!

Furthermore, the undoubted quality of the school’s numerous theatrical productions over the years and Gang Show (in 1962) was in no small way enhanced by Neville’s set designs and painting skills. During the period that Rod Sealy was coaching the 1st XV in the late 1950s and early 1960s the standards improved, as did the results, dramatically. Doug remembers Neville’s input at that time when he would be on hand helping Rod, sometimes three evenings a week, coaching the pack, passing on to the boys a wealth of experience.

His enthusiasm knew no bounds: he played rugby for  Chichester RFC for years, where he made many friends, until well into his 50s; he took school parties skiing to Einsielden many times; he played cricket for the Staff team and for Pagham and he became Head of Year in his later years.  “Taff” was not just a teacher by profession, but a true “schoolmaster”. Chichester High School for Boys was lucky to have had his services for the whole of his teaching career. 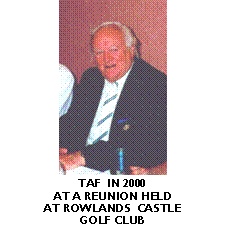