I think he only ever took VI th form Biology. I got to know him quite well because I was Biology Lab Prefect where he probably spent most of his time. It was only later when I lead a research project on Student Transition (i.e. How to manage the transition between school and University) that I realised that he encouraged us to learn in precisely the same way as we did when at University so there was no discernible transition for us. He was not an inspirational teacher like Murch (Bogey) but he turned us into excellent learners. Horses for courses.

I don’t think he ever left the lab although he must have done for me to recognise him. He certainly came across as a very serious and talented individual.

Serious is not an adjective I would apply. He used to weave a pretend dislike of dogs into his teaching and he borrowed “35” from the goons as a signature number. I remember singing the Christmas carol for him one year.

Glad tidings we flog to you and your dog,

Eat your heart out Ralph Lane! 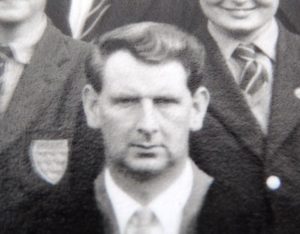 Thanks, Tony, for the 1960 photo of ‘Jacko’. Exactly as I remember him. A brief life history….. You may just remember me, Colin Geatrell, from those days in VIBL and VIBU. If I remember correctly you were at one end of the front bench with me at the other. In between, it was Chris Dyer, whose father taught Maths at CHSB, then Tim Elliott, David Elvidge and me. Again, if I remember correctly did we not present Jacko with the skull of a cow as a Christmas present? We needed, I believe the assistance of the kitchen staff!

Briefly, I left CHSB to go to Portsmouth College of Technology to take up a BSc London course. I was ever grateful for the help of Mr Pasquill in getting there. I ended up with a 2ii after an anxious year 1 with only 25 or so of us coming back for the final 2 years. Then to Southampton for the teaching qualification and a first job at Brockenhurst Grammar School, BGS, where Nuffield Biology made for a First class and challenging start, but one where Biology was very different from CHSB. Nuffield A level was just being introduced which was investigative based. Grove and Newell and Lowson were nowhere to be seen. Did we not invest in Vines and Rees? I remember your rôle in the bio lab. I did the same in the Chemistry labs. Met my wife at BGS who also examined for UCLES via JMB. She ended up on the Human Biol awards committee. Now with a family, I was appointed to Head of Biology at a new upper school in Ferndown and then as Head of Science. Did examining work for JMB and as a question setter for ‘S’ level which stretched the grey cells! Managed to work for the LEA in the new IT team in 1988 and then to manage a large team until early retirement in 1997. Became an OFSTED inspector (keep that quiet!) and moved into teacher training for Dorset. Did some work at the British International School in Jakarta; interesting. OK enough. Thanks again for the photo. They were good days. Ken Murch was a real inspiration. I remember his time-lapse photography in the small prep. room. And the ‘Bug Club’. Did you put up the photo of the course at Portsmouth? Lot of familiar faces! Little did I know it would be a pointer for the future! Yes, we had good teachers!

Like his predecessor, Mr Stephens, he was rarely seen around the school although he did take a General Studies class (Kate’s innovation) for the Sixth Year and taught us the rudiments of genetics.