On Monday, after the OCs Management Committee Meeting in Chichester, I visited my old pal George Stedman in Arundel where he has lived most, if not all, of his life. I last saw him when he lived near the railway station and that would have been in 1961 when we left the School.

He has been married to Jenny for 53 years and has a son in New Zealand and two daughters. Dave his son was a really good batsman and played junior cricket for Sussex. Both daughters played table tennis, one of them becoming a national champion. Clearly, all have George’s sporting blood in them.

He played cricket and football for the School and once opened the bowling with John Snow. He also reminded me that John could play rugby as well as cricket.

The sport was nearly the death of George, literally. A few years ago he was playing table tennis when he began to feel chest pains and generally a bit poorly. He would not concede the match though and played on until he had a heart attack and was taken to St Richard’s. I am pleased to report he is in good shape now as can be seen in the attached photograph. 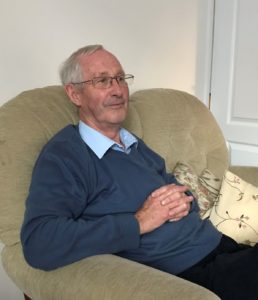 We spent two and a half hours reminiscing about our school days. Amongst other gems was his story of the day his “Tuck Shop” business finally came to an end. Sam did not like him as he always messed about in the woodwork classes. One day he was out on the field behind an air raid shelter selling a Mars bar when Sam spied him. He said in his inimitable Yorkshire accent “I have caught you now boy – go straight to Mr Anderson’s study”.

This entrepreneurial offence may not seem to be to grave today but in those days it was most serious. He was immediately suspended and it seemed unlikely he would be allowed to return. His father wrote a long letter to KD and the Governors and they relented but KD insisted that he was to attend school every day right through to the end of term. Other boys were allowed to stay at home once their examinations were over.

It is indeed an ill wind that blows nobody any good for as a result of this severe sanction George was obliged to sit for hours in the library and study. This stood him in good stead and his results later were better than could have been imagined otherwise. When discussing his future KD suggested he become a teacher. Although George thought this the daftest idea he had ever heard he had no other idea as to a future job. KD then helped him to win a place at King Alfred’s Teacher Training College in Winchester. He played a lot of sport and met Jenny his wife. He went on to teach in Worthing for the rest of his career and was for many years the deputy Head Master! 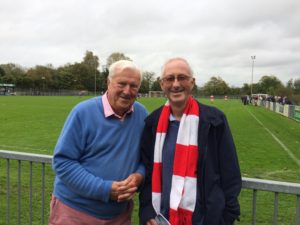 We have often discussed corporal punishment in these pages and obviously George is an expert in this field. He received thirteen strokes in his time at Chichester. The first dozen hurt but the final one from Monk Watson was excruciating. I have always been proud of my mere three strokes and how glad I am that all mine were administered by KD!

In 1962 the world was a very different place. Overseas travel was still limited and the Middle East was off-limits to most Europeans. Nevertheless, George Stedman’s sister married an Iraqi gentleman and moved with him and the children to live in Basra. George’s parents were worried sick as there was no news for months. George was at King Alfred Winchester and at the end of the summer term left with a pal to hitch-hike to see his sister and make sure all was well (as you do!).

Crossing Europe was no problem and they duly arrived in Milan. From there they headed for Yugoslavia and Greece. The former was impossible for hitching a lift so trains were the only option. Once they reached Greece and assured the locals that they were British, not German, they were treated like royalty. Next stop was Istanbul in Turkey. Although transport sometimes meant travelling on a cart pulled by oxen they progressed satisfactorily if a little slowly.

Finally, they arrived in Iraq and were well received but Saddam was in charge and ruled with an iron fist. George started taking photographs on a train and was immediately collared by a policeman who wanted to confiscate his camera. The protests from the local Iraqis were so long and loud that he gave up. George finally arrived in Basra and found his sister and family well.

The return journey was just as long and difficult as the outward one. Consequently, they were very late back in college. George’s English tutor was Harry Blamires who died recently aged 102.

George knew he had to write and present a thesis before Christmas if he wished to be allowed to continue his stay in Winchester. He simply did not think it possible and told Blamires who thought for a moment and told him to write about Sir Walter Scot. George was unconvinced and in despair. Blamires then found a book that he himself had written about Scot and gave it to George to help him out.

Needless to say, George passed with flying colours. On one occasion he answered a question and Blamires commented that strangely enough, he had once written something similar himself!

Recounted by George to the webmaster by telephone in December 2017