I am writing to let you know that my husband died on 1st December 2016, aged 86, so that you can amend your records.  Ken always very much enjoyed receiving the Old Cicestrians newsletter, though we have not been able to travel to Chichester for some years.

As your records may show, Ken left Chichester Boys’ High School in 1947.  He had a successful career as a Hospital Administrator for 37 years but became weary of all the re-organisations and accepted the offer of voluntary redundancy in 1983. This enabled him to concentrate all his time on painting which he had always wanted to do.  He moved to a house in the countryside which had room for a spacious studio and until his health began to fail about ten years ago, painting was a full-time occupation.  He won awards and sold many of his paintings, several of which are now in other countries.

I realise that very few of your members would have known Ken but thought you might like to have these few details.

Incidentally, I attended Chichester High School for Girls, starting there in 1946 at the beginning of Ken’s last year, but we did not meet until 1956 while both working at a hospital in Portsmouth.Ken had been interested in painting and drawing throughout his life and would have liked to have gone to art school, but that was not to be. 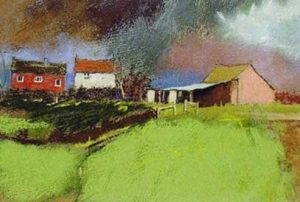 From the Leicester Sketch Club

Since early retirement painting had been his main interest. He had lived in Leicestershire for nearly forty years and enjoyed painting in the area, although he was also drawn to the wilder parts of the British Isles. Although largely self-taught, Ken had made good use of courses at Leicester University and Leicester Education Centre and had been influenced and encouraged be several well-known Leicester artists, including James Kibart, Robert King and Michael Coates. 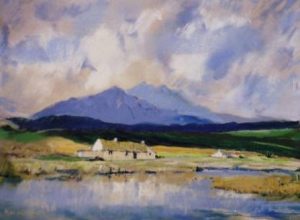 Ken had been President of the Leicester Sketch Club and President of Crown Hills Art Society. Primarily influenced by what he saw, his work developed from the accurate depiction of the topographical to a celebration of the drama of light and shapes in the landscape, showing an increased interest in the abstract. 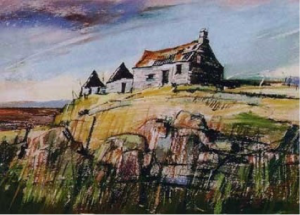