Mike Gallafent entered the Royal Air Force on leaving the School and trained as a pilot, joining No.16 Squadron in June 1953, flying De Havilland Vampire and Venom fighters based at Celle in Germany.  On completion of that tour, he was posted to Pembrey in South Wales as an instructor for fighter conversion. This was followed by a ground tour in radar in which he qualified as a chief controller. Returning to flying duties, he became a staff pilot at the navigation school at Thorney Island flying Varsity aircraft.

His next tour of duty was at Seletar in Singapore where he joined 209 Squadron flying Twin Pioneer aircraft. The original task was anti-piracy patrols in the South China Sea but the Borneo confrontation began which entailed flying in and out of jungle strips throughout Sarawak and North Borneo. The aircraft normally carried some twelve passengers but the load varied from transporting prisoners or body bags. Bathroom scales were used to weigh everything to ensure clearance of the trees at the end of the strip. Passengers varied from Government ministers to Frankie Howerd and a concert party to entertain troops. He was also attached to the British Embassy in Bangkok and flew reconnaissance missions to identify landing strips throughout southern Thailand with subsequent debriefings in London. 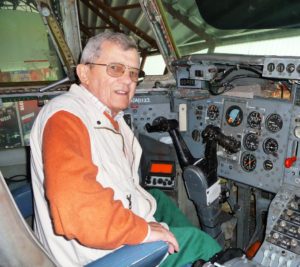 On returning from Singapore he joined 53 Squadron which was being formed with the Belfast long-range freighter at Brize Norton. After a three year tour as a co-pilot, he moved across to the Captain’s seat. The tour was varied and very interesting including visits to Hong Kong and landing on the former Kai Tak runway; to Madagascar, evacuation of British forces from Aden and numerous trips across the Atlantic. A highlight was a long spell in Hawaii where he was attached to the United States Air Force at Hickam Air Force Base, Honolulu. Here he led a team involved in the transit of British aircraft associated with atomic weapon trials at Christmas Island (Editor’s note: one Old Cicestrian witnessed the atomic explosions and lived to a ripe old age to tell me about it several years ago). He then became Officer Commanding Plans at Brize Norton and involved with RAF support for the Concorde world sales tour. On the return of Concorde, he was invited to join the Very Important person (VIP) Commemoration flight with the Archbishop of Canterbury and other dignitaries.  He qualified in military intelligence.

Mike left the RAF in 1978 and joined the Sultanate of Oman’s air force in Arabia on a three-year contract. He then moved to Saudi Arabia where he was employed as an instructor in their Air Force Academy with employment at Riyadh and Dhahran. His employer in Saudi Arabia was British Aerospace and his time there was fourteen years which included the first Gulf war. He left there in 1995 at the age of 63 and he and his second wife and two children settled in Reading where they live to this day. 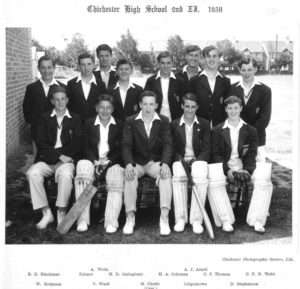 Please click on this link to view  Mike’s Photograph Album

Current Old Cicestrian members Geoff Wills and Tony Hazell are immediate contemporaries of his having all three entered the form “Alpha” with form master Oscar Lloyd on 16 September 1943. (Geoff received a musical Christmas e-card this year (December 2017) from Mike in which it was noted that he has two sons, two daughters (from an earlier marriage) and five grandchildren.