On 3 August 1991 my wife Jeanette and I flew down to East London with my 4½-year-old daughter Lauren for a one day cruise back to Durban on the Oceanos liner. We left my 6-month-old son Wayne with friends, one car at the airport and another close to the docks so that upon our return we wouldn’t have transport problems. The flight was bumpy and the landing in East London was unpleasant due to the strong winds, but it is not uncommon in this area. With a group of friends, we caught a shuttle to the East London docks. 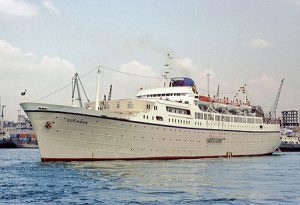 The departure of the Oceanos was delayed by approximately two hours due to the 40-knot winds and 30-foot waves, so I spent some of the time taking a video of the boat and surrounding area with my new video recorder, a gift from my company for long service. Finally, the go-ahead was given, we boarded and headed out into the stormy ocean. First to our cabin to drop off our belongings before going to the lounge for the welcome party. I took the opportunity to go out on deck (I was the only one) to take a video of the rough seas.

Having our young daughter with us we went to the first dinner setting. The waiters were clever to wet the thick table mats to stop the plates from sliding around but such was the movement of the boat they had trouble even walking with the plates of food. Plenty of spillages later we had finished and went up to the lounge to enjoy the evening’s planned entertainment, which turned out to be a very good resident band with a comedian/compere.

The storm worsened, the winds were now howling and the waves were even bigger.

I heard the low drone of the engines stop, and the futile attempts to restart them. The drums fell over on the stage more than once. The electricity failed and we were suddenly on emergency lighting. A couple of the band members continued to entertain us as long as they could. The comedian walked across to the emergency key inside its traditional red box and said: “I’ve always wanted to do this.”  With that he took the hammer attached by a small chain and struck the glass…..it didn’t break so he had another go. This time was a success so he took the key and opened the outside sliding glass doors.

There was no announcement but clearly, we were in trouble. I went down towards my cabin only to find that the boat had obviously sprung a leak as the water was above knee height in the corridor and our cabin was far from the lowest deck. Seeing that, I went back to the lounge. Still, no announcement but I noticed the crew were already in lifejackets and were starting to hand them to the guests. They initially offered me a child’s lifejacket so I asked them for one that would fit me! Apart from the nose-to-tail up and down movement, the boat was lurching at fairly steep angles from side-to-side almost in slow motion. The lounge furniture was sliding all over the place, settees falling over or scooting across the floor complete with passengers. I kept putting my feet out to stop them crashing into us. Three old ladies next to us were tipped over backwards. If anyone has seen the old movie, ‘The Poseidon Adventure’ you may recall the lounge furniture sliding all over the place and tipping over. From my memory of the film, it was just like that in real life.

A call for women and children to the deck saw my wife helping a lady with two small children, one of whom was a six-month-old baby, and me carrying my young daughter. We were pushed into a lifeboat almost immediately. It all seemed like a dream but reality dawned when the lifeboat was rapidly dropped into the raging ocean. One lowering chain released, the other didn’t. Whilst the two crewmen were freeing it the other chain was swinging dangerously back and forth over the lifeboat, smashing the canopy over the motor area to pieces. Chains released, small motor alive, we put-putted off into the stormy seas. It was almost pitch dark as by now it was after 10 pm, but the gale force wind was blowing white horses off the top of the double storey sized waves this was visible every now and then in whatever light there was. We aimed straight into the waves, down one and up the next like an out of control roller coaster. There were these huge ‘walls’ of water all around us. I was sure we were going to get swamped and sink, but whoever designed these lifeboats did a good job and on we sailed. Ours was completely open, larger but rather like the old fishing boats at Bognor beach.

The motor stopped…..oh no! The crew got it going but it stopped every 10 minutes or so. During the trip I was sick over the feet of the lady squashed next to me…..so much for dinner! We couldn’t see where we were going but suddenly a tanker, the Great Nancy, appeared behind one of the giant waves. We steered to the lea side although it was still extremely rough. If you have never been next to a tanker, they look enormous from way down there.

Our lifeboat was smashing into the side of the tanker but finally, two lines were secured. These couldn’t be too tight because of the large swells so we continued to be driven into the side of the tanker whilst our rescue was taking place. A rope ladder was thrown over the side by the Chinese crewmen but apart from the fact it was several metres too short, there was no chance that any of the children could use it.

Plan B was a plastic bucket, slightly smaller than a dustbin, with a rope tied to it. The children were placed in it one at a time and dragged up the side of the tanker. When it was time for my daughter to go I was petrified that she would fall out. I told her to keep down but as soon as they pulled the line upwards her head popped over the top. Seeing it I shouted to her to keep down. She did but I was ready to swim!

By this time our lifeboat had split with all the banging into the taker and was taking on water.

Once the children were safe it was the time of the adults. We were pulled up the side of the tanker one by one attached to a strong rope by a piece of webbing which we tied around under our arms. One very old lady said she wasn’t going. I told her she had no choice and up she went. I was the last passenger, followed by the two crewmen. My turn saw me squashed between the lifeboat and the tanker as the lifeboat went up faster than I did and was driven into the tanker by the sea. Bruised and feeling very sorry for myself I was hauled to the deck of the tanker. They have a rounded edge with the railings slightly inwards. I gripped the bottom rail and was never going to let go! Well, I did and shortly joined the rest of the people from our lifeboat in a single cabin with two single beds.

It was now approximately 00.30 so we spent over two hours in our lifeboat. The two crew were saved and a few minutes later our lifeboat disappeared below the waves. The crew of the Great Nancy didn’t speak any English which made it interesting, but at least we were safe. I spent the rest of this trip listening to the engines! The crew gave us a ‘mixer’ can of coke each and some dry bread. Anything was welcome but apart from water, that was it for the next day and a half.

We lined the young children up sideways, about six at a shift, on the one single bed. Adults rested head to foot on the other bed. When not resting, the rest of us sat on the floor of the cabin with our backs against the wall. Daylight finally arrived and we expected to see the coastline closer to Durban, but no, we were still in the vicinity of the stricken liner and had in fact picked up people from another lifeboat, including the captain’s wife and it was clear she had no idea where he was.

It was around 1430 that afternoon (August 4th) and by then the weather had improved vastly. Looking through the porthole I watched the Oceanos give a last breath and sink nose first into the ocean, disappearing completely along with all the possessions we had taken with us including my new video camera. All irrelevant of course as we were alive. Her resting place is off the old Transkie Wild Coast in an area called Coffee Bay. Sometime after that we left the area and headed for the port of Durban, arriving early on Monday 5th August. We were met by an army of psychiatrists, doctors, police, customs officials and reporters. Once on dry land, we were taken to a local beachfront hotel, called the Tropicana, given a guest room in which to shower and freshen up before going down for a buffet breakfast.

My next concern was the cars and getting into our house. I contacted a locksmith who took me home and opened the safety gate and back door of my house. So far so good but the spare keys were in a safe. This took the locksmith another hour before he very accurately drilled a small hole in line with the tumblers and finally opened it up. Armed with spare keys to the cars and house he took me back to the hotel.

We collected the nearest car and drove to the airport to collect the other. I headed home whilst my wife headed to our friends to collect our young son before coming home. Well, adventure over and it was back to work on Tuesday morning, albeit a day later than scheduled.

The South African Navy and South African Airforce were called in and ferried the remaining passengers to dry land in helicopters. They flew 13 of the 16 rescue helicopters in a 7-hour mission rescuing 225 passengers. As there were many trips to be made the helicopters had to refuel in between as well.

The captain, instead of going to jail, was put in charge of another boat. The heroes were undoubtedly the SANDF helicopter pilots and crew, along with Moss Hills and one or two other entertainers.

Out of interest the company that owned the boat wouldn’t accept responsibility and their insurance company reluctantly paid out up to 75% of the value of any claim. The balance I claimed from my own insurance company. Being owned and sailed under a foreign flag we were legally advised not to sue them as the likelihood of success was below minimal. The Oceanos lies in a watery grave some 3.1 nautical miles offshore and although divers have visited the wreck the currents are too strong to do so safely.

My wife bumped into Moss in Durban not long after the sinking and he gave us a video that he compiled of all the bits and pieces he either took or gathered together.

To me, it was an absolute miracle that every single person was saved.

I have been asked if I would go on another cruise………absolutely YES!