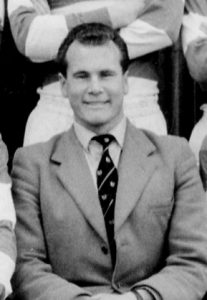 I remember Rod Sealy coming to the School in the autumn term of 1958 as Head of PE, replacing John (“Tinker”) Taylor who, I think, had taken a post at Merchant Taylors in Liverpool. He certainly inspired me straight away. Although I always thought myself as a good performer on the rugby field in inter class and House matches, I never felt that I was good enough to play for the School , and nobody had suggested I could or encouraged me to try. Rod changed all that by insisting I attend extra training and coaching for the Colts. I was thrilled and within a week or so I was a regular team player. I have no doubt that it was Rod Sealy’s charisma and motivation that inspired me. During his time at the school he substantially raised the levels of performance of all school XVs, but in particular the 1st XV. As an example of his inspirational approach I can recall, in his first term and in one of the first matches of school year the 1st XV were beaten 52-3 by Portsmouth Grammar School but in the return match, a term later, we beat them 12-0.

He was innovational, too. He coached set piece moves in the scrum, line out and penalties which was new to us at the time and very avant-garde for the time .He chose the best players in the school for the 1st and 2nd XVs. For example he saw the talents of 4th formers Alan Polson and Bas Cooper at scrum half and fly half and chose them to play in the 1st XV. Cooper went on to play for England Schools and Polson for Southern Schools vs Northern Schools. Both, incidentally, became Professors in Dentistry and Mathematics respectively.

He left in 1962 to become head of PE and Rugby coach and later House Master at Monmouth School and produced a number of Internationals including Tony Jordan for England and Keith Jarrett for Wales in both Union and League.

Footnote by Gareth Davies The Daily Telegraph sports writer: “I’d like to record the passing of Rod Sealy, who coached both Stephen James (Glamorgan Cricketer) and me in the First XV at Monmouth. Rod was also my house master for five years. He passed away last week, aged 78. He was a tough old boy, a disciplinarian who was hard to like until you left the school. Then you realised that he instilled great values in his boys, and could make a silk purse from a sow’s ear. He also took a very keen, and proud, interest in the progress of all Old Monmothians in the sporting world. He was in touch with James and myself to the end. RIP “Rod Sealy”.